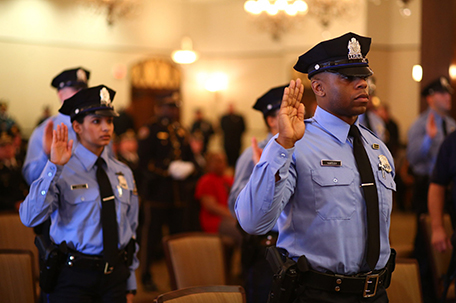 On Thursday, Philadelphia City Council sent a message to the Philadelphia Police Department: We’re watching you.

Council passed a series of bills that did everything from institute a residency requirement for perspective police recruits to putting the practice of stop and frisk and the creation of an independent Citizens Crime Commission on the ballot in November.

Also, Council voted to hold hearings to look at the police response to a June 1 protest on I-676 that became a story in Thursday’s New York Times. During that protest, tear gas, pepper spray and other means were utilized by SWAT on protestors in violation of department guidelines. While there are other investigations going on in relation to the protest and what went on there, there needs to be one in which the public is involved, said Councilmember Helen Gym, the sponsor of the resolution calling for the hearings.

“It’s clear there was a breakdown at multiple levels of decision-making and it’s essential that in the course of the multiple investigations that are going on that at least one of them is fully public,” she said. “We need a truth and reconciliation process.”

At a news conference held on Thursday afternoon, Commissioner Danielle Outlaw and Mayor Jim Kenney held a press conference at the Roundhouse apologizing for their initial response to the incident.

Not too long after Philadelphians took to the streets to demand more accountability from the city’s police department in the wake of the death of George Floyd in Minneapolis, two bills designed to get just that were introduced in City Council.

The group also held testimony on Councilmember Katherine Gilmore Richardson’s bill, which would allow the public to have something it has never had: a say when it comes to the contracts that the City negotiates with the Fraternal Order of Police.

The “Let Philly Breathe” bill focuses on formally prohibiting the use of knees or feet on the chest, neck or head of someone during an arrest. While chokeholds themselves are already prohibited under police department policy, this bill would put a finer point on that prohibition, Johnson said.

The bill has support from the law enforcement community. Commissioner Outlaw and SEPTA’s Police Commissioner Thomas Nestel both testified in support of it.

Outlaw thanked Johnson for pointing out the hole in the department’s policy and doing something to close it.

“Our use of force policies have been reviewed and critiqued by the Department of Justice and this oversight was not identified. This is the very reason why I support the public posting of departmental policies,” she said. “This is not necessarily a change in departmental policy, but a necessary clarification. I will be amending the directive as soon as possible to incorporate this clarification.”

“It’s a sad state of affairs when legislation is needed to keep an officer from kneeling on a suspect’s neck, head or face,” he said. “We need to have a model for policing that embraces protecting people, not strangling them.”

John Coyle, an attorney at McEldrew Young who has worked with the families of people who were killed by police, supported the process this bill begins.

But, Coyle emphasized, this is a beginning.

“This crisis has been permitted to fester by a disregard for human dignity, an “Us” versus “Them” attitude,” he said. “Today’s bill is an important first step, but I implore you to go much further. We have to discuss review and oversight of the police department from outside the police.”

Stephanie Parnell, a former detective in the Philadelphia Police Department, echoed that sentiment.

“This has to be a measure that has teeth and holds officers accountable,” she said.

Toward that end of accountability, Gilmore Richardson’s bill would mandate a public hearing on all FOP contracts 30 days before they’re ratified by the union.

The idea behind the contract isn’t to weaken the union, but to make the public more aware of what the police department is and isn’t allowed to do under the contract, Gilmore Richardson said.

“Our city has risen up over the last few weeks to demand change,” she said. “Our citizens have made their voices heard. I’ve gotten almost 30,000 emails calling for more transparency and accountability for the police department. Those cries can’t go unheard.”

Johnson and Gilmore Richardson’s bills will be addressed for final passage when City Council returns from its summer recess in September.