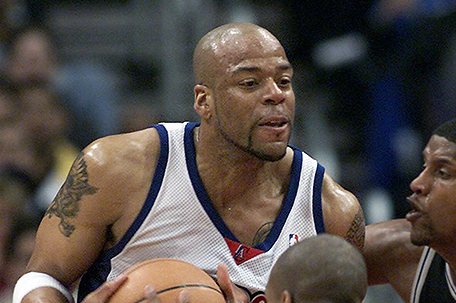 ABOVE PHOTO:  Los Angeles Clippers’ Sean Rooks fends off San Antonio Spurs defenders Antonio Daniels and Samaki Walker, right, during the first half of a basketball game in Los Angeles in 2001. Former NBA center and Philadelphia 76ers assistant coach Sean Rooks has died. He was 46. The team released a statement from Deborah Brown, the mother of Rooks, on Tuesday night, June 7, 2016.  (AP Photo/Jill Connelly, File)

76ers coach Brett Brown said Wednesday that Sean Rooks had promising prospects for his coaching career before his death.

The former NBA center and 76ers assistant coach died Tuesday at age 46, after interviewing earlier in the day for a job with the New York Knicks.

Brown said Rooks meant a lot to many people.

“Sean Rooks was a wonderful person with a kind soul who deserved to live longer than he did,” Brown said. “Sean was with me for two years and helped our young players and coaching staff by sharing his experiences in such an endearing way.”

Brown says he met with Rooks recently to help him prepare for an interview to become the head coach of an NBA developmental team.

“When he was offered the position just a few days later, we spoke of the challenges, growth and responsibility that would help him personally move his career forward as a head coach,” Brown said. “He was genuinely excited by this offer, as well as other job opportunities that were coming his way.”

The cause of Rooks’ death has not been disclosed.

Rooks had visited with Knicks President Phil Jackson and general manager Steve Mills for an assistant coaching position on Jeff Hornacek’s staff. He had spent the past two years on Brett Brown’s staff in Philadelphia.

Rooks played 12 seasons after being selected in the second round of the NBA draft by Dallas in 1992. He averaged 6.2 points in 749 games with seven teams.

Rooks’ son, Kameron, is a 7-footer playing for California. He also is survived by another child, Khayla, and his mother, Deborah Brown.

Reflections on the career of NBA “Zen Master” Phil Jackson