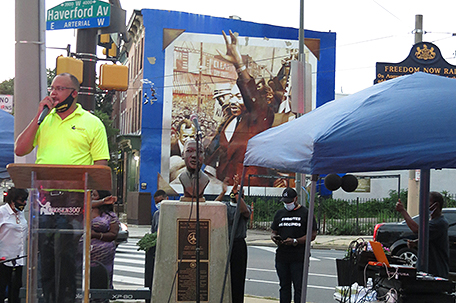 ABOVE PHOTO: Pastor Brian Jenkins of the Chosen 300 Ministries speaks to the crowds.

Even with the threat of rain, lightning  and thunder, the rescheduled 2020 Freedom Now rally, held on Friday, Aug. 7, retained so much of it’s urgency and purpose that it kept the commemorative event from being diminished.

What an appropriate time for a commemoration  of a historic moment  for West Philadelphia and the nation. This empowering event  was planned to bring  attention  to the plight of African-Americans.

,During the commemeration,  Rev. Brian Jenkins of Chosen 300 Ministries, other pastors and C Councilmember  Jamie Gauthier spoke to a crowd of about 150 people who gathered to hear the heartfelt messages about the issues that are currently plaguing the African-American community.

“Today is our Freedom Now Rally for justice,” Jenkins said. “The second thing is stopping evictions. A lot of families [are] being pushed out of our communities with developers coming in and getting tax abatements and substandard education.”

“Here in Philadelphia,it’s all about communities,” Jenkins continued. “So, we are here to address those issues. But it’s on the 55th year anniversary of Dr. King standing here, at the Freedom Now Rally and we’re just bringing it back. Fifty-five years later and changes still need to be made.”

Back in 1965, the Freedom Now Rally was a two-day event that traveled through six cities: Philadelphia, New York, Washington, DC, Chicago, Newark and Cleveland. At that time, Dr. King had several issues he wanted to address, such as police brutality, systematic racism, and racial injustice and was raising money for the Civil Rights Movement.

After having an informal meet and greet event at the late Mrs. Abigail Pankey’s house located at 38th & Folsom Street with local community leaders such as Andy Jenkins, the late Herman C. Wrice,  pastors and other stakeholders,  Dr. King marched up to 40th & Lancaster Avenue among a crowd of 10,000 cheering residents from West Philadelphia. The communities of Parkside, Mantua, Belmont, West Powelton, Powelton Village and University City, were well represented at that time.

Rev. Dr. Andy Jenkins reflected on that day and what he remembers about King’s visit and what he thinks of today’s young leaders.

“Leaders like Cecil B. Moore, Georgie Woods, Herman Wrice, myself and so many ministers were there,”  Jenkins, a community leader in Mantua for 57 years recalled “It was a blessing being there at the rally back then. To be there, because it was a form of unity there. There was also dysfunction with members of the local chapter of the NAACP from North Philadelphia and West Philadelphia and their disputes that Dr. King helped to resolve that day.”

“Herman and I were just starting out with the Mantua Community Planners (MCP) and the Young Great Society (YGS) organizations,” Jenkins added. “But, it was a blessing to be around the seasoned leaders and the national leaders at that time.”

For many years, the site at 40th & Lancaster Avenue was a forgotten memory of what happened on that day in 1965. But thanks to men like Mr. Joe “Hot Joe” Walker, they were able to raise money to bring a Dr. King bust and placard to this piece of sacred ground in the middle of the street, as well as a mural featuring  Dr. King  in the background, waving out to the crowd.

The annual celebration of this dynamic man has been taking place since 2009.

Jenkins spoke passionately, stating  that while all lives matter, black lives have not, and why there is  now a renewed  effort to address injustice in America. He also stated that the nonsense has got to stop.

“We can make this city a wonderful and safe place for all people white, black and brown,” Jenkins said. “And for the children here in Philadelphia. I want to emphasize this, that we are a nonviolent people. We are a people that believe in doing things with dignity and diplomacy. But, there are some young people that have grown up and if you don’t listen to us, if you don’t hear our voice, and don’t hear what we got to say. Let me say this — and I’m a pastor —[ that there are] a lot of people that will tear this [expletive] up. Somebody ought say amen. But we will take a nonviolent approach.”

“We can’t see injustice anymore,” Jenkins continued. “We can’t take police brutality any longer, we can’t take the problems of the oppressed people of color. We are just not gonna take it.”

“There are three things that affect us today that we need to address. We came to address gentrification in our communities, we are sick of the tax abatements with developers coming into our communities and doing whatever they want and causing taxes to go up and affecting our elderly homeowners,” Jenkins concluded.

I spoke with former City Councilmember Jannie L. Blackwell about what the rally meant to her.

“I think it is wonderful,”   Blackwell said. “He [Jenkins] had a lot of ministers there, like Pastor Broadnax and so many pastors from West Philadelphia, North Philadelphia and people from the various community groups like Saunders Park and PEC [who] were supportive of this and many others.”

“We usually have this every year,” Blackwell added. “And it’s wonderful. We do need to honor King, who was out here in this community with 10,000 people on August 3, 1965 and we need all of us to remember this as brothers and sisters to protect and love one another.”

“We came to get rid of crime, and love one another in every way that we can,” Blackwell concluded. “ I’m proud to still be here. I will always be here. Service is what God gave me to do. So, I’m still here, still doing what I can and I’m just proud to be here and God bless everyone.”