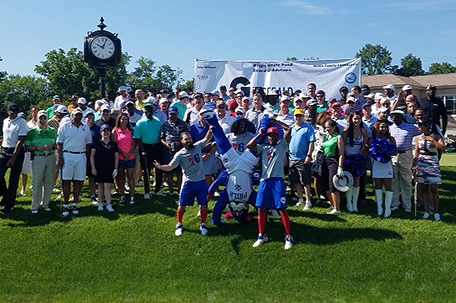 ABOVE PHOTO:  Participants at The Green Valley Country Club in Lafayette Hill, Pennsylvania.

Gerald Henderson Jr. is best known for his success in the NBA.

The 12th overall pick in the 2009 NBA Draft and son of NBA retiree Gerald Henderson Sr. is no stranger to either life on the basketball court or philanthropy off of it, raising more than $250,000 while hosting his annual charity golf event in Charlotte, North Carolina.

But last weekend, Henderson brought the 4th Annual Gerald Henderson Charity Golf Invitational to his hometown of Philadelphia and hosted it at the Green Valley Country Club in nearby Lafayette Hill, Pennsylvania.

The weekend of events began with a basketball clinic for children at St. Joseph’s University on Saturday. A number of professional athletes and coaches participated sharing their knowledge with a group of eager young people. Sunday’s “Green Carpet Party” took place at The Franklin at 8th and Chestnut. In true “Green Carpet Party” fashion, the main hall of The Franklin was chicly decorated with rotating LEDs, while hues of green peaked through an illuminated stage.

The live entertainment for the evening was provided by Philadelphia’s own trombonist Jeff Bradshaw, and the very talented singer/songwriter Jade Novah. These two dynamic performers kept the crowd engaged throughout the evening with a number of fan favorites. 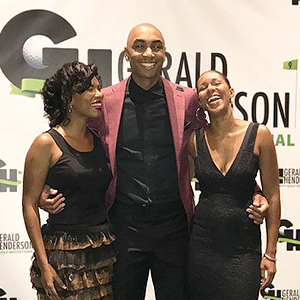 Each year, Henderson selects one organization as the beneficiary of his charity. Funds raised by this year’s weekend of events will benefit the Community Partnership School’s Scholarship Fund. After opening remarks from Henderson and his co-host ESPN reporter Prim Siripipat, Henderson paid homage to Community Partnership School (CPS). CPS, located at 1936 Judson St, is the only school in Philadelphia of its kind. CPS focuses on affordable schooling for low-income families with children in pre-kindergarten through 5th grade. Henderson surprised CPS with a check for $15,000 to help them continue their mission for families to pay only what they can afford.

The weekend of giving back was rounded out with the celebrity golf tournament. The final day of the Invitational also featured a women’s luncheon hosted by 6ABC’s Sharrie Williams, which honored local legend, retired ABC anchor Lisa Thomas-Laury.

All in all, no matter who walked away with a win on the course, CPS and its mission was the real winner! Henderson is truly dedicated to paying it forward and supporting young people. His desire to give back will continue to shape the lives of many. To keep up with Henderson’s charitable endeavors, visit http://ghjrinvitational.com/. To find ways to support CPS visit http://communitypartnershipschool.org/.