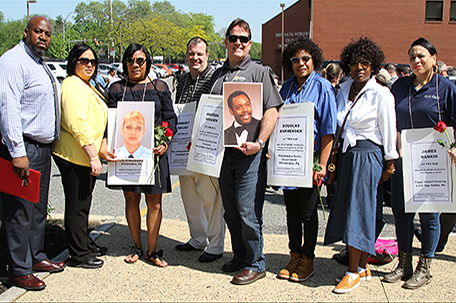 The 46th anniversary of the founding of Occupational Safety and Health Administration and the 46th National Observation of Workers Memorial Day. On April 28th, employees who lost their lives while on the job are remembered and attention is focused on making working conditions safer for all workers. Four hundred participants were present at Philadelphia’s observance to share breakfast and hear a panel of speakers address different aspects of worker safety, legislation and education.

Fourteen more people lost their lives on the job during 2016 than the previous year. “We need to get those numbers down. And the present administration (federal government) that we have and the budget cuts we have, it is going to affect OSHA, and other funding, affecting the work that we do,” Michelle Jamison, Chair, Philadelphia Area Project on Occupational Safety & Health Executive Board said.

Many unions represented at the breakfast were touched by sudden tragedy that occurred on the job. AFSCME District Council 47– a mix of public and non-profit organization employees — lost Kimberle Holsey, 60, to a heart attack following a confrontation. DC 47 President Fred Wright said not every worker is currently protected by OSHA because, “OSHA doesn’t cover public sector workers.” The link between workers and the safety efforts of the unions is led by committed individuals like Surrietha Blunt and Traci Woodall, Health and Safety Awareness Educators at the Laborers’ District Council.  “We have four local unions which are 135, 57, 332 and 413. We do monthly health screenings for them, and early detection is definitely key. It’s a key part of staying healthy,” Surrietha Blunt said.  “In the construction industry, the laborers have it hard. It takes a toll on the body over time. So, we want them to stay healthy as long as they’re out there working.”  Training refreshes practical knowledge to help keep workers safe, in part by helping laborers to recognize when conditions are indeed not safe. “We want them to know that,” Blunt said.

Ultimately, a holistic approach is needed to help avoid the many and varied workplace injuries and deaths. “Well, the important thing is that for the members themselves, they got to know that education is key at the end of the day. Our Laborers’ District Council has a great training school, and therefore there are no excuses for members not to be educated and aware of any standards (or) updated standards from OSHA,” Toni Staten, executive director of the Laborers’-Employers Cooperation and Education Trust said. Laborers information sessions and health screenings are often tailored to suit specific needs of workers. That includes advising women about appropriate screenings for their age level, as well as doing the same for men. “And then it will be the summer months and we will focus on safety issues related to the heat,” Staten said. For laborers and other construction workers, there is an increased risk of being injured or killed at work, simply because of the nature of their jobs.

Gov. Tom Wolf was one of the speakers at the breakfast. “I want to honor the people who have been killed in work place accidents, and I also want to remind us that right now we still have within our hands the ability and the freedom to organize.”  Following the breakfast, union members and relatives of those that have transitioned marched to the Great Plaza on Penn’s Landing for the memorial ceremony. PhilaPOSH says 134 men and women lost their lives on the job in the past year. They were recognized at the memorial service, with red roses cast into the Delaware River for each one. Their faces were all present, represented by their enlarged photographs. During the procession to the river, their stories were told on placards worn by their colleagues.