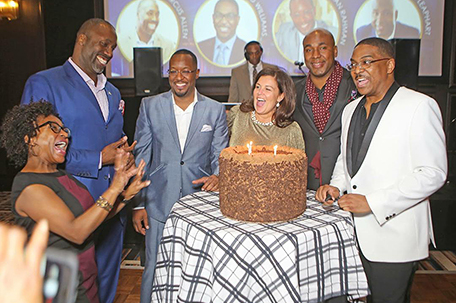 On February 23rd, four of Philadelphia’s most prominent business people gathered to celebrate their birthdays and philanthropy simultaneously.

The 4:44 stands for “4 friends, 4 birthdays and 4 charities.” Dubbed a “Birthday FRIENDraiser,”each of the birthday celebrants selected an organization as their recipient of choice for the proceeds of the event.

Allen selected Big Brothers Big Sisters, Leaphart selected The Fund for The School District of Philadelphia, Rahman selected the Community College of Philadelphia, and Williams selected The Urban League of Philadelphia.      Quincy Harris, host of Fox 29’s “The Q” served as host for the evening’s festivities, with music provided by DJ Gary O. The VIP reception was held at The High Limit Lounge, located at SugarHouse Casino. The  reception was immediately followed by the party held at the SugarHouse Event Center . Some of Philadelphia’s most familiar faces were present for a night of fun for four wonderful causes. Rahman shared his reason for Community College being his charity of choice.

“I sit on the Community College of Philadelphia Foundation board, which I serve as vice chair,” he said. “The reason why I serve on the board is because in Philadelphia, you have a lot of young people who grew up in communities or ZIP Codes where they don’t really have a pathway from our existing education system to the traditional and higher-priced institutions. Community college ever leave, is an economic engine to open up opportunities and access to professional careers in the city.” 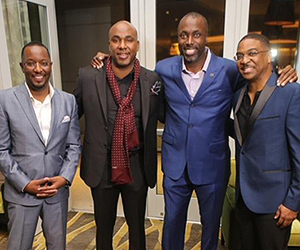 Rahman also offered his perspective on the importance of using any and every opportunity to give back.

“We are just a microcosm of what we can do on a macro scale to create a culture of giving back,” he continued. “We have to find ways, organizations, and institutions that are making a difference and strengthening communities that are helping our youth. So find ways whether it’s a small get together with friends at a coffee table or over dinner… leverage those defining moments and events where people want to give in some form or fashion to bigger causes to help make these institutions not only survive but thrive in the 21st-century.”

All of the proceeds raised during the 4:44 FRIENDraiser were donated to charity truly making it a party with a purpose and a night to remember!