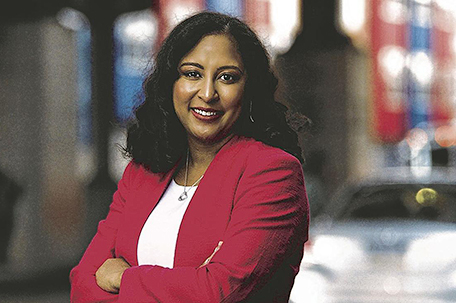 ACHIEVEability celebrates its 40th anniversary of providing help to those looking for a way up.

Since 1981, ACHIEVEability has helped people in West Philadelphia make the most of their lives.

Created by the Sisters of Mercy, people experiencing homelessness, and members of West Philadelphia’s business community,

ACHIEVEability offers West Philadelphians who are facing poverty, homelessness, or looking to further their education the opportunity to do so through programs that promote self-sufficiency, home ownership, and the opportunity to pursue post-secondary education.

In 2017, Jamila Harris-Morrison became the executive director of ACHIEVEability. She had come to the organization right out of college, hoping to get some experience before getting her master’s degree in social work. As someone who grew up in a single-parent home, the organization and its mission resonated with her.

“One of the things that attracted me to ACHIEVEability is the idea that it was a voluntary program, [and] that all the parents who were choosing the family self-sufficiency program wanted to make a change in their life and wanted to include ACHIEVEability in that journey,” she said. “As an individual who grew up in a single-parent household experiencing poverty — my mom never made more than $22,000 — there are a lot of aspects of the program that resonated with me and [ACHIEVEability] felt like a way that I could give back. The reason I’ve stayed is because it’s an amazing program.”

On October ]19, ACHIEVEability will celebrate its 40th anniversary of helping people improve their own lives with a gala at the Mann Music Center in West Philadelphia. The benefit, entitled “40 Years Strong: Rising and Thriving,” will feature food from West Philadelphia-based restaurants, including Booker’s and Clarkesville, music from the Sid Miller Dance Band, and honorees including Gov. Tom Wolf, members of Philadelphia City Council, and alumni of the organization’s programs. The SUN is among the event’s media sponsors.

The SUN sat down with Harris-Morrison to talk about ACHIEVEability’s first 40 years, what’s next for the organization, and how West Philadelphia has benefited from what the organization has been able to do.

SUN: Thanks so much for giving us some of your time, Ms. Harris-Morrison. You mentioned the family self-sufficiency program. Can you talk a little about that and how it works?

JHM:  Our family self-sufficiency program has worked with parents who are experiencing or at risk of homelessness. We move them into one of our affordable housing units in West Philadelphia, but we view education as a pathway out of poverty. So, all the parents are pursuing post-secondary degrees with the idea that it would lead to a career and a living wage opportunity. We can’t guarantee that families won’t ever experience any challenges along the way once they leave us. But we know that they’ve got a new set of tools to be able to manage and never find themselves homeless and without resources again.

SUN: Do you connect parents with these opportunities, or do they have to find them on their own?

JHM: It’s a combination of both. Some parents come to us with a little bit of college. The minimum requirement is that you have a high school diploma, but most parents are starting out for the first time. Most of our families start with community college, because it’s an affordable option. They can get their prerequisites done and then many go on to get bachelor’s degrees, graduating from Drexel, Rosemont, Temple — tons of places.

I think of one of the first people that I worked with. Her name was Talena and she moved in with her daughter Sanaya, who was about 4 years old. Talena was working at Dunkin Donuts making $7.75 an hour and was able to take her prerequisites at Community College for the nursing program. She then went on to [Thomas] Jefferson’s Bachelor of Science in Nursing program, where she ultimately graduated, and now she’s working at Jefferson making $65,000. It’s a game-changer for that family.

SUN: Is this the only program that ACHIEVEability offers, or are there others?

JHM: We’ve had to continue to evolve and keep up with the times and be responsive to things like COVID that none of us predicted and changing conditions in sector and workforce trends. And so, we’ve learned, you know, over the last decade that it’s not enough just to help the family. If we’re not helping that neighbor who lives next to the family, then we’re not really doing our part to really end poverty permanently.

SUN: Thank you so much for your time!

Tickets for “40 Years Strong: Rising and Thriving” can be purchased on the ACHIEVEability website at: www.achieveability.org.

A vortex of achievement wrapped in determination