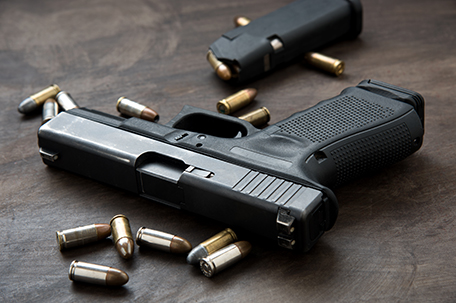 PHILADELPHIA – Three Philadelphia police officers were shot and wounded and a gunman was killed early Wednesday when a SWAT team tried to arrest a man wanted on a homicide charge, police said.

The shooting occurred around 6:30 a.m., soon after officers tried to serve a warrant in North Philadelphia, said First Deputy Commissioner John Stanford. The 19-year-old assailant fired at officers through a window as they were attempting to knock on the front door, Stanford said.

Officers entered the house, where the man and officers exchanged gunfire, he said. The man tried to exit the back of the home while firing at officers, who returned fire.

The man was wanted in a homicide that occurred in August, Stanford said, but did not release details of that killing. He was also a suspect in several armed robberies.

The 19-year-old was taken to a hospital and pronounced dead, Stanford said. Police did not release details of his injuries or say how many times he had been shot.

District Attorney Larry Krasner identified the suspect as Raheem Lee, who was wanted in the Aug. 21 slaying of Theodore Bell, found dead of gunshot wounds in a car. Krasner said Bell was “connected to” Lee’s family and the shooting appeared to be domestic.

One officer was shot in the hip, while another had a leg wound. A third officer was hit in the chest by a bullet that ricocheted off of his Kevlar vest. All three were taken to a hospital and were listed as stable, but their names and further information about them were not disclosed.’