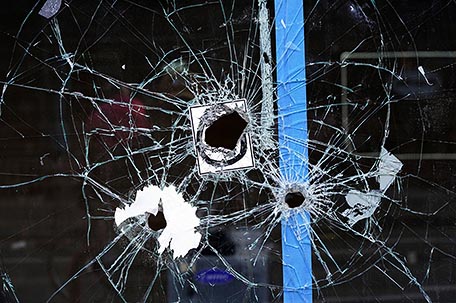 ABOVE PHOTO: Bullet holes from a prior shooting are still present in a storefront window at the scene of a fatal overnight shooting on South Street in Philadelphia, Sunday, June 5, 2022. (AP Photo/Michael Perez)

PHILADELPHIA — A second person is in custody in connection with the gunfire that killed three people and wounded 11 in a Philadelphia entertainment district over the weekend, authorities said, but no charges have yet been filed in any of the deaths that stemmed from it.

Rashaan Vereen, 34, was arrested without incident in Philadelphia, the U.S. Marshals Service said Tuesday. He is charged with attempted murder, aggravated and simple assault, reckless endangering, conspiracy, and weapons crimes, as well as evidence tampering and obstruction of justice, marshals said. One other man was previously charged in the Saturday night shootings, though not with the deaths of any victims, two of whom were believed to be bystanders. And police on Tuesday released a photo of a person wanted in connection with the shootings and said that person should be considered armed and dangerous.

Police also noted a $20,000 reward for information leading to an arrest and conviction in a homicide, and an additional $10,000 reward per suspect offered by the federal Bureau of Alcohol, Tobacco, Firearms and Explosives.

Police officers patrolling the South Street area in central Philadelphia around 11:30 p.m. Saturday raced to the scene after hearing shots and found several people with gunshot wounds lying on the sidewalk and in the street.

Seeing a man on a corner firing a handgun at people about half a block away, one officer opened fire, and that man dropped his handgun onto the sidewalk and fled, authorities said. Assistant District Attorney Joanne Pescatore has said authorities have identified that man as Quran Garner, and he faces charges including aggravated assault and aggravated assault on law enforcement officers. Authorities had said earlier that an arrest warrant for attempted murder had been approved for another individual. Authorities have said the gunfire started with a fight between two people who then began firing a total of 17 shots at each other.

One man, 34-year-old Gregory Jackson, was killed, and the other was wounded; no charges are planned against him since both men had permits to carry and that shooting is considered self-defense, authorities said.

Police said Garner began firing back at the area of the initial confrontation until he was wounded in the hand by fire from a police officer. He fled and surrendered to other police officers at the scene of an earlier shooting nearby.

Authorities have said that the other two people killed by the gunfire, 27-year-old Alexis Quinn and an unidentified 22-year-old man, as well as many of the other people wounded by gunfire — who ranged in age from 17 to 69 — are believed to have been innocent bystanders.

It’s unclear whether Vereen. who was arrested Monday night, or Garner have attorneys to speak on their behalf; a message could not be left Tuesday at a phone number listed for Vereen, and a listed number for Garner couldn’t be found.

South Street is known for its entertainment venues, bars, restaurants, and nightlife. Surveillance video from businesses showed scores of people fleeing as the gunfire broke out. Police are also investigating several other nearby shootings, one fatal, to see whether they might be relate