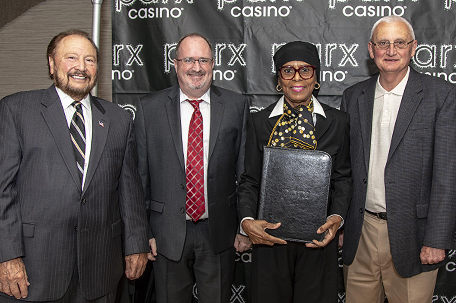 The 2019 Universal Audenried Charter High School graduating senior class continued making great academic strides by receiving a total of $800,000 in scholarships. The graduates celebrated this accomplishment on June 3, 2019 during a graduation ceremony at the University of Pennsylvania’s Irvine Auditorium.

The original Charles Y. Audenried High School officially closed in 2005 to make way for a new state of the art facility and re-opened during the 2007 – 2008 school year. In 2011, it became a Universal Companies managed school under the School District of Philadelphia Renaissance Initiative.

The class of 2019 was the eighth graduating class under Universal management, with over 80% of the graduates headed to two or four year colleges and universities.

“I am proud to join of our future leaders and extend congratulations to the 2019 Senior Class,” Universal Companies founder and chairman Kenny Gamble said. “The graduating seniors, parents and guardians, teachers, staff and administrators of Universal Audenried are to be commended for doing a fine job; this is phenomenal. Education is truly the passport to our young people’s future.”

Philadelphia Association of Black Journalists president Manuel McDonnell Smith, who was the commencement’s keystone speaker, inspired the graduates with an address entitled, “The Importance of Winning Against All Odds.” Smith is a proven award-winning, multi-platform newsroom leader, assignment editor, producer, storyteller and communicator who produces a variety of news segments, reports and other materials for NBC 10 Philadelphia.

Under Universal’s tutelage, Audenried became the Commonwealth’s first charter school with a CTE program. Enrollment in the Culinary, Healthcare and Diesel Academies has increased, attendance has been at an all-time high and incidents at a record low. The school’s Keystone scores are trending upwards.

For the last four years, Principal Blanchard Diavua has led the charge in ensuring the scholars of Universal Audenried receive the necessary tools to look beyond their years of high school.

“I am excited to stand with the 2019 class and truly say they are a magnificent group of scholars who soared beyond measure,” Diavua said. “I am doubly proud and appreciative of the many organizations, corporations and non-profits that have awarded scholarships to my seniors.”

The school — which is the only career and technical education charter school in Pennsylvania — provides National Certification through their various academies. In 2019, 37 scholars earned National Occupational Certifications (NOCTI), all testing at the Competent or Advanced levels in their fields.

All NOCTI scholars who earned a 70% or higher on their written exam earned three to four college credits. They are:

Class of 2019 College and University Scholarship Awards and Acceptances At-A-Glance:

Hussian College of Art: Damarr Lawrence, on a full scholarship

University of Miami: Inaayah Muhammad, on a $40,000 scholarship

Anton Moore and Unity and the Community: Aaliyah Rogers and Zoie Cliett ($500 each)

In addition to the achievements listed above, six members of the class of 2019 earned a total of 36 credits through the school’s partnership with the Community College of Philadelphia’s Dual Enrollment Program. The recipients were: Tayana Alexander, Seth Bennett, Jade Harris, Kareem Kennedy, Inaayah Muhammad and Aaliyah Rogers. Ameer Lane completed Lincoln University’s Upward Bound program, and Tony Tran is headed to the Marines this fall.

To learn more about Universal Audenried Charter High School or register your child, feel free to visit the official website at: www.universalcompanies.org or call 215-952-4801. The school is currently accepting applications for the Fall 2019 school semester.