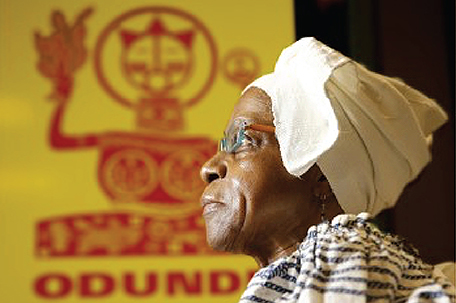 June 1, 2018 Category: Local Posted by: Philadelphia Sun Staff
ABOVE PHOTO:  Co-founder of Odunde, Lois Fernandez
Leaders from throughout the African Diaspora will be in Philadelphia, June 8 to June 10 to celebrate the Odunde Festival, the life of its founder Lois Fernandez, and the preservation of the cultures of the Global African Diaspora.
Odunde, which means “Happy New Year” in the Yoruba language, was founded 43-years ago by Fernandez, who died in 2017. Each year, the festival brings over 400,000 people from around the world to Philadelphia to celebrate African culture.
A big part of Odunde is the African marketplace. This year the focus is on developing the Global African Marketplace through international trade within the Global African Diaspora. Odunde will present several free events co-sponsored by City Councilwoman Jannie Blackwell, State Senator Sharif Street, the Mayor’s Commission on African & Caribbean Immigrant Affairs, and the Global Interdependence Center. Delegations from Ghana and Cote D’Ivoire, and diplomats from Cameroon, Liberia and the African Union will participate in the discussions.
The weekend begins on Friday, June 8 with a seminar hosted by State Sen. Street on “Making Long Term Finance Work for Africa” where the visiting diplomats and participants will discuss access to direct U.S. investment into Africa. The delegation also will visit the Philadelphia Regional Port Authority, the second largest port receiving produce and agricultural products from western and southern Africa. 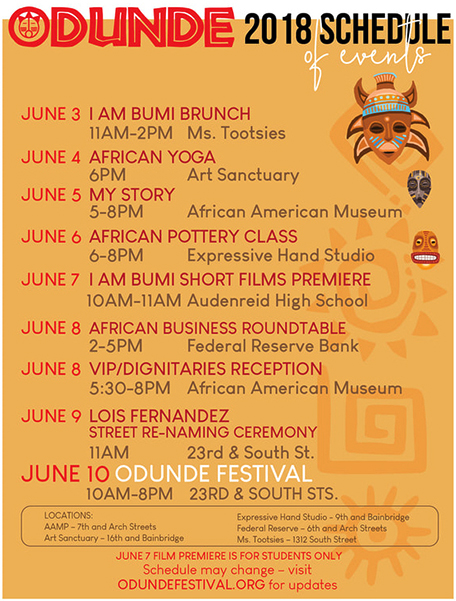 “Philadelphia has a long and productive trade relationship with Africa,” explained Stan Straughter, chairman emeritus of the Mayor’s Commission on African & Caribbean Immigrant Affairs and chair of the African & Caribbean Business Council of Greater Philadelphia. “It is estimated that trade from African countries to the Philadelphia ports is in excess of $10 billion. The African Business Roundtable will introduce you to the many trade and investment opportunities in the West African countries of Cameroon, Ghana, Ivory Coast and Liberia.”
The highlight of the business events is the African Business Roundtable, 3:00PM, Friday, June 8 at the Federal Reserve Bank of Philadelphia, 106 N. 6th Street. Hosted by the Global Interdependence Center, the roundtable will include presentations from several African nations and remarks from City Commerce Director Harold T. Epps, State Sen. Street, and Robert Scott, deputy assistant secretary of African Affairs, U.S. State Department. The keynote speaker is His Excellency Alan Kyerematen, Ghana Minister of Trade and Industry. Registration is required. To register, call 215-238-0990.
The African Diplomatic Reception immediately follows the business roundtable at 5:30PM, at the African American Museum in Philadelphia [AAMP], 7th & Arch Streets. Hosted by Councilwoman Blackwell, founder of the Mayor’s Commission on African & Caribbean Immigrant Affairs and Echoes of Africa, and Oshunbumi Fernandez-West, president of Odunde, Inc., the reception will honor Kyerematen and the visiting ambassadors.
At 11:00AM on Saturday, June 9 the community will gather at 23rd & South Streets when the street will be renamed in honor of Lois Fernandez, who founded the Odunde Festival 43 years ago. Since then, the festival has grown to become the largest African festival in the nation. The ceremony will honor Fernandez for her contribution to African culture in the Diaspora and Yoruba culture specifically.
Following Saturday’s street naming ceremony, Congressman Dwight Evans, Councilwoman Blackwell and Fernandez-West will co-host a seminar: “Dialogue on Women’s Leadership in the African Union and the Global African Diaspora”, at 3:30 PM in Philadelphia City Council Chambers. Her Excellency Arikana Chikombori-Quao, African Union Ambassador to the United States is the keynote speaker. The panel includes the honorable Olivia Santana, Secretary of Women, Employment, Income & Sports in Bahia, Brazil; honorable Veronique AKA Member of Parliament, Republic of Cote d’Ivoire; Her Excellency Dr. Erieka Bennett, African Diaspora Forum and Dr. Sandi Williams, CEO, A Wealth of Women International. A reception follows at 5:30PM in City Council Caucus Room.

The 43rd Odunde Festival officially opens 10:00AM, Sunday June 10. The procession to the Schuylkill River to give offerings to Oshun, the Yoruba spirit of fresh water, will leave 23rd & South at 12 noon.
For more information on these events visit odundefestival.org.