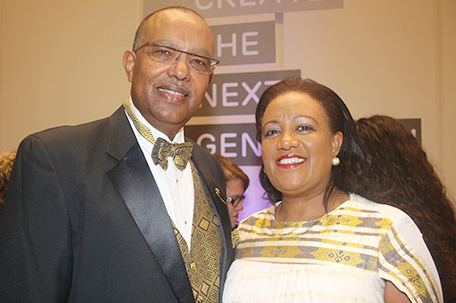 On October 7, 2017, Children’s Hospital of Philadelphia (CHOP) celebrated its recent breakthroughs and publicly launched “For Tomorrow’s Breakthroughs: The Campaign for Children’s Hospital of Philadelphia” at its spectacular, bi-annual Carousel Ball. The ball dates back to 1957 and has raised tens of millions of dollars,  making a major impact on the field of pediatric medicine. Millions of children from around the world are reaping the benefits of this pioneering work.

Savannah Guthrie, co-host of NBC’s “Today Show”, was the evening’s mistress of ceremonies at the black tie-event benefitting cancer immunotherapy. During the course  of the program, Guthrie conducted a lighthearted interview with 9-year-old Zion Harvey of Baltimore, who made history at CHOP in 2015 when he became the first child in the world to receive a bilateral hand transplant. He was accompanied by his mother, Pattie Ray.

The 2017 Carousel Ball, attended by over 650 beautiful ladies in ball gowns and handsome gentlemen in tuxedos, was held at CHOP’s impressive new Roberts Center for Pediatric Research. The state-of-the-art facility — created to advance the Hospital’s knowledge of genetics, foster collaboration between clinical and research teams and create individualized treatment for children with complex diseases —  is located on the banks of the Schuylkill River on South Street in Philadelphia. 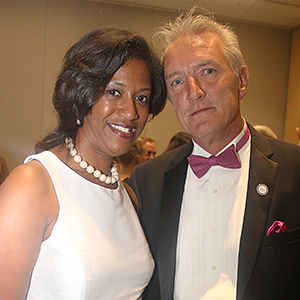 “Now, more than ever, private support is the key to advancing Children’s Hospital of Philadelphia’s ability to deliver breakthroughs for every child and family,” said Monica Taylor Lotty, CHOP executive vice president and chief development officer. “We are seeking to raise $1 billion by 2020 to fuel CHOP’s ambitions. Every gift, no matter the size, makes tomorrow’s breakthroughs possible. Only with your support can we achieve our vision to make every child healthy.” 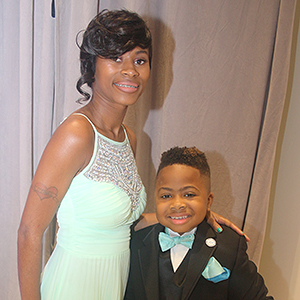 Pattie Ray and her son Zion Harvey. Harvey was the first child to have a bilateral hand transplant at CHOP. (Photo: Robert Mendelsohn)

Children’s Hospital of Philadelphia is among the crown jewels of our city.

According to virtua.org, the Children’s Hospital of Philadelphia was founded in 1855 as the nation’s first pediatric hospital. Through its long-standing commitment to providing exceptional patient care, training new generations of pediatric healthcare professionals and pioneering major research initiatives, Children’s Hospital has fostered many discoveries that have benefited children worldwide. Its pediatric research program is among the largest in the country. In addition, its unique family-centered care and public service programs have brought the 546-bed hospital recognition as a leading advocate for children and adolescents.