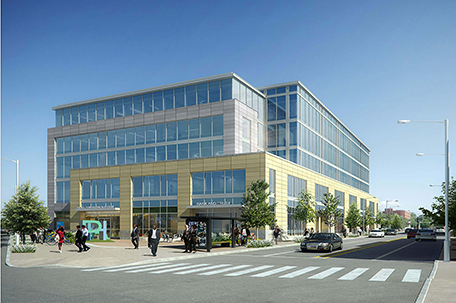 ABOVE PHOTO:  The Philadelphia Housing Authority took a major step in 2016 toward developing a new headquarters building on Ridge Avenue in Sharswood. The PHA board approved a $45 million contract for the construction of the building, and a deal was also reached with Sav-A-Lot to bring a supermarket to the neighborhood on the same block.

The year 2016 will go down as an extremely productive year for the Philadelphia Housing Authority (PHA), but nowhere was the positive impact felt more than in the Sharswood neighborhood of North Philadelphia where PHA is overseeing a historic transformation.

The highlight there was the grand opening of Blumberg Phase I, 57 homes on vacant land adjacent to the site where the high-rise Blumberg Apartments formerly stood. The Sharswood/Blumberg Transformation Plan includes 10 phases, and when fully realized in five to seven years it will yield over 1,200 homes, offering a mix of affordable and market-rate, rental, and homeownership.

Also as part of the plan, PHA expanded a successful home repair program with Habitat for Humanity aimed at helping an additional 30 Sharswood homeowners remain in the neighborhood. The partnership with Habitat was further expanded to include development of 20 new affordable homes for sale in the community to attract and retain lower-income families to the neighborhood.

PHA’s commitment to Sharswood went beyond building homes. The agency took major steps toward developing a new headquarters building there as well. The housing authority board approved a $45 million contract for the construction of the building on Ridge Avenue. A deal was also reached with Sav-A-Lot to bring a supermarket to the neighborhood on the same block. Finally, in December, PHA and the School District of Philadelphia reached agreement to reopen the former Vaux building to serve students in the Sharswood community with a locally managed high quality high school.

Later in the year, unrelated to Sharswood, PHA reached an agreement to work with Alterra Property Group, LLC to convert PHA’s former headquarters location at 2012 Chestnut Street into 160 market rate apartments and 40 PHA-supported apartments for lower-middle income tenants. The idea here was to include an affordable component within a Center City luxury apartment building.

“We know that the Chestnut Street property is attractive and had received numerous inquiries about it,” said Kelvin Jeremiah, PHA President and CEO. “It’s in our interest and the City’s interest to redevelop this site to maintain a vibrant, healthy atmosphere in Center City. Including affordable apartments was a critical component of this deal for us as well.”

PHA was busy in other parts of town as well. The agency’s plans to develop a three-square block area in the Strawberry Mansion neighborhood received a big financial boost when the Pennsylvania Housing Finance Agency (PHFA) awarded Low Income Housing Tax Credits worth over $13 million toward the construction of the new $23 million development. Construction will begin early in 2017.

PHA’s partnerships with HELP USA and the Archdiocese of Philadelphia made the construction of 139 new affordable housing units possible at the old Spring Garden School, St. Francis Villa, and St. John Neumann Place II. In April 2016, the PHA Board of Commissioners agreed to sell the former site of the Liddonfield Homes in Northeast Philadelphia to NewCourtland, Inc., for $5.5 million. Once a final agreement is reached, the nonprofit will build 300 units of affordable senior housing on a portion of the site. Another portion of the site will also be developed as athletic fields for Holy Family University along with other site improvements.

The housing authority also made strides in rehabbing its scattered site portfolio. In the past year, 211 scattered site homes were rehabbed. This again underscores PHA’s efforts to produce as many affordable homes as possible, especially in improving neighborhoods.

PHA’s Police Department officers began using body cameras to improve transparency and service to residents and the general public in early 2016. By mid-year, two more PHA residents joined the department as officers. There are now eight residents on the force, with the agency committed to hiring a total of ten qualified residents to become officers.

PhillySEEDS, Inc., a charitable PHA subsidiary, honored 62 PHA residents seeking higher education with $256,000 in scholarships in 2016. The scholarship total this year increased $37,000 from a year ago. The charitable group also provided a total of 2,500 book bags stuffed with school supplies to PHA residents at 23 sites across the city.

Funding was approved for the extension of a successful after –school program at the Norris Apartments. The Department of Housing and Urban Development (HUD) highlighted the program as a model for resident engagement under the Choice Neighborhoods Initiative (CNI). The City of Philadelphia, the lead partner in the CNI grant for the North Central neighborhood, and HUD have agreed to support the program over the next three years under that grant.

The Jobs Plus program opened at the Raymond Rosen Community Center in North Philadelphia in mid-summer. The program allows residents to conveniently access the job related services they need to get ahead economically at a “one stop” service center.

Topping the year off, the Philadelphia Business Journal named PHA President and CEO Kelvin A. Jeremiah as one of its “Most Admired CEOs.” The Pennsylvania Apartment Association and the National Association of Housing and Redevelopment Organizations honored several PHA developments with awards for design, maintenance, and community presentation.

“I could not be more proud of our PHA team for the accomplishments we achieved in 2016 for the families and communities we serve,” Jeremiah said. “At a time of steadily decreasing federal funding for our programs, we have to be smarter and more resourceful than ever in order to carry out our mission and serve as many people as possible.”