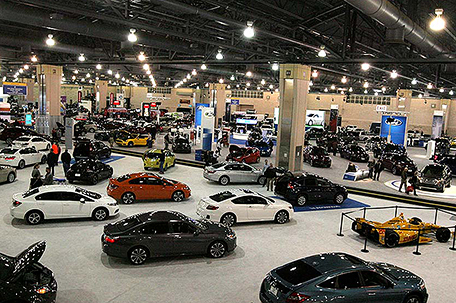 Thousands of people pack will themselves into the Pennsylvania Convention Center at 1101 Arch Street in Center City to attend the 2015 Philadelphia Auto Show.

The 2015 Philadelphia Auto Show is recognized as one of the top auto show events in the country. This year, various car manufacturers from around the world are displaying more than 700 vehicles across 700,000 square feet of what has been called, “…wood grain, leather and steel.”

“Yes, this event has become one of the premier shows of this type anywhere in the world,” says an excited Haraaj Sanghera, a representative of British Vauxhall, the United Kingdom arm of General Motors.”Everyone who wants to crack the U.S. market is here displaying their wares,” he said.

The United States is considered to be one of the most important car markets in the world—a market hungry for viable alternatives to traditional domestic manufacturers. “More and more, Americans are looking to find alternatives to domestically manufactured vehicles’” says Sanghera. “This is an opportunity for global manufacturers to get product before the vast American market.”

Carlisle Events, a sponsor of the Philadelphia Auto Show, is sponsoring the 2015 version of what it calls “The Philly Face-Off.”

Andy Wood, an events planner for Carlisle, says that the Face-Off is a competitive event that highlights the rivalries existing within the automotive world. “In a display adjacent to the main exhibit, we have set up a competition between Ford Mustangs, Chevy Camaros and Mopar sporty vehicles,” says Wood. “Yes, these brands have a long history of competition in the American car market—and brand specific themes DO come and go—but this year, there is also a face-off between the American brands and  their foreign competitors.

“This is an exciting time as American manufacturers are finally confident that domestic cars are now absolutely competitive with their foreign counterparts ” says Wood. “There is an invigorating sense of real competition here.”

The show runs until February 8.