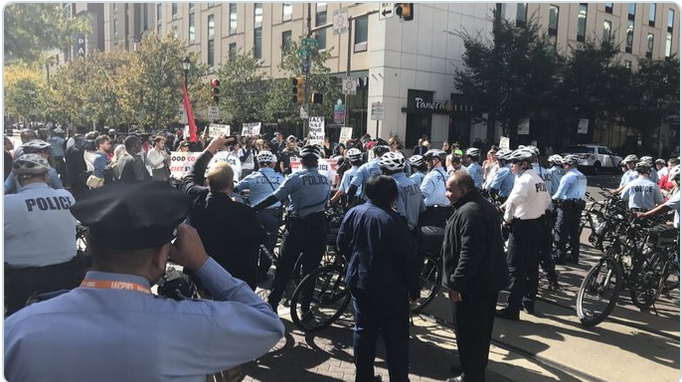 NBC10–Two police officers were injured while several protesters were arrested during a demonstration outside the International Association of Chiefs of Police convention in Center City Saturday afternoon.

Dozens of protesters first gathered on Arch and 12th streets near the Pennsylvania Convention Center around noon where the conference is taking place. During the conference, Attorney General Jeff Sessions spoke to police chiefs from cities across the country and encouraged them to forge new relationships between local and federal authorities.

The protesters carried signs that included the words, “No Good Cop in a Racist System,” “No War on the Poor,” “Abolish the Police,” and “IACP has love 4 Nazis.” At some point during the demonstration, a scuffle broke out between some of the protesters and officers, police said. At least two officers suffered non-life-threatening injuries. Police also said several protesters were arrested though they did not reveal how many. They were taken to 9th District police headquarters on 401 N. 21st Street where a crowd of protesters gathered.