2 in custody, 2 sought in fatal shooting outside high school 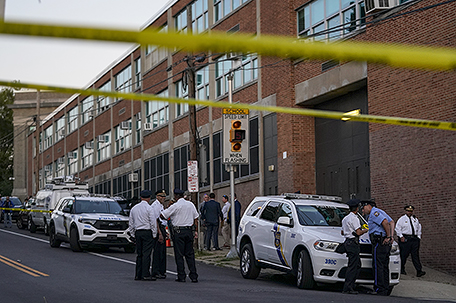 ABOVE PHOTO: Investigators work the scene where multiple people were shot near a high school in Philadelphia, Tuesday, Sept. 27, 2022. (AP Photo/Matt Slocum)

PHILADELPHIA — Police have named two more juvenile suspects in last month’s ambush shooting outside a Philadelphia high school that killed a 14-year-old and wounded four other teenagers after a football scrimmage.

Police said they took a 17-year-old into custody and are seeking a 15-year-old in the Sept. 27 shooting outside of Roxborough High School. Authorities earlier announced that they had arrested 21-year-old Yaaseen Bivins and were searching for a 16-year-old suspect.

Police said the four suspects identified so far have been charged or will be charged with murder, four counts of aggravated assault, firearms crimes and other counts in the shooting. They earlier said they were seeking six suspects: five shooters and a driver.

Authorities said five people jumped from a parked SUV and opened fire on teens who were walking away from an athletic field at the high school. Nicholas Elizalde, 14, of suburban Havertown, was killed and three other teens were wounded and rushed to a hospital. One was treated at the scene.

Police have said they don’t believe Elizalde was one of the intended targets of the attack.

Hours before the shooting, Mayor Jim Kenney, a Democrat, signed an order banning guns and deadly weapons from the city’s indoor and outdoor recreational spaces, including parks, basketball courts and pools. A judge barred the city from enforcing that order, siding with a legal challenge citing a state law that prevents any city or county from passing gun-control measures.