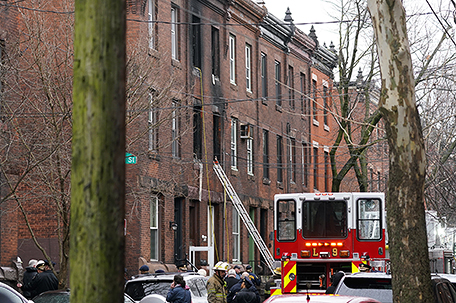 ABOVE PHOTO: Philadelphia firefighters work at the scene of a deadly row house fire, Wednesday, Jan. 5, 2022, in the Fairmount neighborhood of Philadelphia. (AP Photo/Matt Rourke)

PHILADELPHIA—A large house fire in Philadelphia early Wednesday killed 12 people, including eight children, and sent two people to hospitals, fire officials said. Officials said at a news conference later in the morning that there were four smoke detectors in the building, but that none were operating.

Firefighters and police responded to the fire at a three-story rowhouse in the city’s Fairmount neighborhood around 6:40 a.m. and found flames coming from the second-floor windows, fire officials said. The house had been converted into two apartments, police said.

The fire was brought under control after less than an hour. WPVI-TV reported that at least one child was seen taken out on a stretcher. Television news footage showed ladders propped up against the smoke-blackened front of the house, with all its windows missing.

Holes remained in the roof where firefighters had broken through.

“I knew some of those kids — I used to see them playing on the corner,” said Dannie McGuire, 34, fighting back tears as she and Martin Burgert, 35, stood in the doorway of a home around the corner.

They had lived there for a decade, she said, “and some of those kids have lived here as long as us.” “I can’t picture how more people couldn’t get out — jumping out a window,” she said.

“Losing so many kids is just devastating,” said Mayor Jim Kenney. “Keep these babies in your prayers.”

Message from The Philadelphia NAACP Branch President Catherine Hicks, on the tragic loss of 12 lives in a house fire