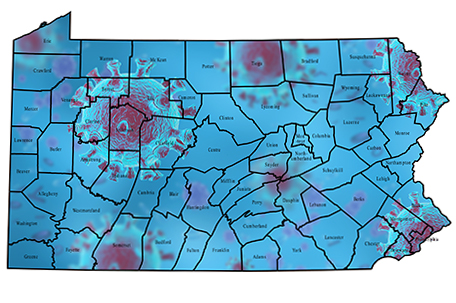 HARRISBURG, Pa. (AP) — An $11 billion no-new-taxes spending package won passage in a lame-duck Friday night session in Pennsylvania’s Legislature, as lawmakers sought to plug a multibillion-dollar deficit brought on by the pandemic and carry state government operations through the rest of the fiscal year.

Lawmakers voted as they rushed to wrap up their two-year session. A coronavirus outbreak in the House of Representatives caused hours of delay Friday before the main spending bill passed the chamber, 104-97, and the Senate, 31-18.

Gov. Tom Wolf, a Democrat, will sign it, his office said.ADVERTISEMENT

“COVID-19 has left Pennsylvania in a difficult financial situation, and this budget protects against furloughs and deep cuts to critical programs,” his office said in a statement.

Billions in federal aid helped paper over the state’s yawning deficits, while the state draws hundreds of millions of dollars from a bank line-of-credit to prop up cash flow.

Most Democrats opposed the budget package, reflecting unhappiness with using federal coronavirus relief aid to underwrite state government costs, rather than provide hazard pay to frontline workers and to aid universities, hospitals, schools, restaurants and businesses and institutions suffering during the pandemic.

“We should take no pleasure in MacGyvering a state budget by stealing funds that were meant for coronavirus relief,” said state Sen. Tim Kearney, D-Delaware.

Democrats criticized the use of environmental program money to balance the budget, and warned that hundreds of transportation projects would stall, inflicting layoffs on construction crews.

State Sen. John Blake, D-Lackawanna, warned that using more than $4 billion in one-time cash to balance the budget will make the next budget more difficult when the current fiscal year ends June 30.

Leaders of the Republican-controlled Legislature lauded the package, saying it exercises fiscal restraint.

“Just as Pennsylvanians have worked to live within their budgets, we too focused on finalizing a budget that would continue to serve our residents without asking them for more of their hard-earned dollars,” state Senate Majority Leader Jake Corman, R-Centre, said in a statement.

Public schools, universities and many programs and state agencies will have to get by without an increase in funding.

That had been clear since May, when the Legislature approved a piecemeal, no-new-taxes $25.8 billion budget, while they waited to see how economic damage from the coronavirus would unfold and whether the federal government would deliver more budget aid.ADVERTISEMENT

At the time, budgetmakers projected a $6 billion deficit, primarily due to the economic effects of the coronavirus. Since then, revenue collections have exceeded expectations, prompting the Wolf administration to raise its full-year revenue projection by $2 billion.

All told, the package approved Friday authorizes roughly $11 billion in new spending, bringing the current year’s operating budget to $36.5 billion, about 4% above last year’s approved spending. The higher spending is driven primarily by medical care for the poor, elderly and disabled.

To close the rest of the gap, lawmakers are using more than $3.3 billion in federal pandemic aid and transferring more than $500 million from off-budget state accounts.

Of those accounts, more than $150 million comes from environmental improvement funds, prompting a warning from one state lawmaker that the transfers may be illegal.

“This is not the way we ought to be funding state government,” said state Rep. Greg Vitali, D-Delaware.

Another $185 million is coming from a fund financed by premiums on workers’ compensation insurance policies that ensures claims are paid if an insurer becomes insolvent.

The federal aid includes $1.3 billion left over from last March’s federal CARES Act. Democrats wanted to distribute the money as grants to a wide variety of institutions and businesses, but did not say how they would have otherwise financed the state’s operating costs.

Meanwhile, Wolf’s Department of Transportation warned lawmakers that tax collections struggling through the pandemic means it cannot pay contractors and must stop hundreds of construction projects on Dec. 1 after lawmakers rejected its proposal to borrow against highway funds.