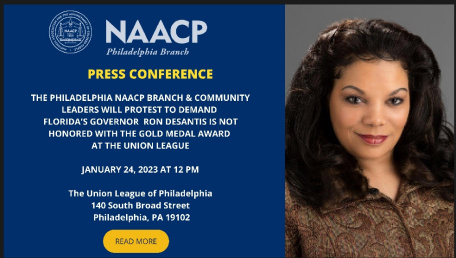 PHILADELPHIA, PA  (January 23-24, 2023) – Philadelphia Branch President Catherine Hicks will join a coalition of city leaders, activists, and community members on Tuesday, January 24, in taking a stance against The Union League of Philadelphia and demanding that they do not honor Florida’s Governor Ron DeSantis with the Gold Medal Award.

The protests/press conference will be held starting at 12 noon in front of The Union League of Philadelphia, 140 South Broad St., in Center City Philadelphia.

DeSantis will receive the club’s gold medal, an honor first awarded to President Abraham Lincoln in 1863, despite protests from more than 100 Union League members who have asked that the event be canceled.
During his time as Florida’s governor, DeSantis did not support the peaceful transfer of presidential power to President Joe Biden in 2021; supports political candidates who support the lie that the 2020 presidential election was stolen; and violated the U.S. Constitution’s right to free speech in his state by supporting the banning of books from libraries and schools and the restriction of what school teachers can say and teach.

What: Philadelphia Branch NAACP will participate and speak in the Fight Against Anti-Blackness Protest and Press Conference.