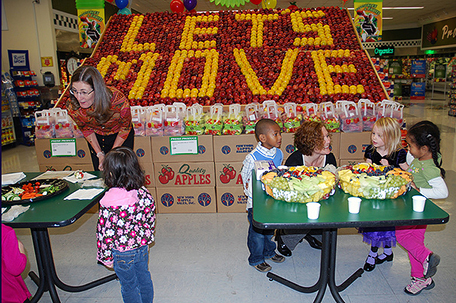 ABOVE PHOTO:  Radar Clinic Dietitian and Nutritionist Beth Trainer (left) asks 5-year-olds from the post’s Child Development Center what vegetables they would like to make a wrap, while Defense Commissary Agency Dietitian Karen Hawkins asks her group what kinds of fruits they would like to use to make their kid-sized “fruit kabobs.” The healthy food demonstration was part of the Fort Myer Commissary’s health and wellness event, which was in direct support for first lady Michelle Obama’s “Let’s Move!” campaign, an initiative that combats childhood obesity.  (Photo by Public Affairs Specialist Millie Slamin)

WASHINGTON — Even the scoreboards in high school gyms will have to advertise only healthy foods under new rules announced Tuesday by the Obama administration.

Promotion of sugary drinks and junk foods around campuses during the school day will be phased out under the rules, intended to ensure that such marketing is brought in line with health standards that already apply to school foods.

That means a scoreboard at a high school football or basketball game eventually wouldn’t be allowed to advertise Coca-Cola, for example, but it could advertise Diet Coke or Dasani water, which is also owned by Coca-Cola Co. Same with the front of a vending machine. Cups, posters and menu boards which promote foods that don’t meet the standards would also be phased out.

Ninety-three percent of such marketing in schools is related to beverages, and many soda companies already have started to transition their sales and advertising in schools from sugary sodas and sports drinks to their own healthier products. Still, companies are spending $149 million a year on marketing to kids in schools, according to USDA.

“The idea here is simple — our classrooms should be healthy places where kids aren’t bombarded with ads for junk food,” the first lady said. “Because when parents are working hard to teach their kids healthy habits at home, their work shouldn’t be undone by unhealthy messages at school.”

The rules also would allow more children access to free lunches and ensure that schools have wellness policies in place.

The proposed rules come on the heels of USDA regulations that are now requiring foods in the school lunch line to be healthier.

Rules set to go into effect next school year will make other foods around school healthier as well, including in vending machines and separate “a la carte” lines in the lunch room. Calorie, fat, sugar and sodium limits will have to be met on almost every food and beverage sold during the school day at 100,000 schools. Concessions sold at afterschool sports games would be exempt.

The healthier food rules have come under fire from conservatives who think the government shouldn’t dictate what kids eat — and from some students who don’t like the healthier foods.

At the White House event, Mrs. Obama defended herself against critics, saying that “I didn’t create this issue.”

“This new approach to eating and activity is not just a fad, and it’s not just a movement,” she said. “Nowhere is this more clear than in our schools.”

Aware of the backlash, the USDA is allowing schools to make some of their own decisions on what constitutes marketing and asking for comments on some options. For example, the proposal asks for comments on initiatives like Pizza Hut’s “Book It” program, which coordinates with schools to reward kids with pizza for reading.

Rules for other school fundraisers, like bake sales and marketing for those events, would be left up to schools or states.

Off-campus fundraisers, like an event at a local fast-food outlet that benefits a school, still would be permitted. But posters advertising the fast food may not be allowed in school hallways. An email to parents — with or without the advertising — would have to suffice. The idea is to market to the parents, not the kids.

The rule also makes allowances for major infrastructure costs — that scoreboard advertising Coca-Cola, for example, wouldn’t have to be immediately torn down. But the school would have to get one with a healthier message the next time it was replaced.

Schools that don’t want to comply could simply leave the National School Lunch Program, which allows schools to collect government reimbursements for free and low-cost lunches for needy students in exchange for following certain standards. Very few schools choose to give up those government dollars, though, and those that do tend to be wealthier.

The beverage industry — led by Coca-Cola Co., Dr. Pepper Snapple Group and PepsiCo — is on board with the move. American Beverage Association President and CEO Susan Neely said in a statement that aligning signage with the healthier drinks that will be offered in schools is the “logical next step.”

“Mrs. Obama’s efforts to continue to strengthen school wellness make sense for the well-being of our schoolchildren,” Neely said.

Although Mrs. Obama lobbied Congress to pass the school nutrition bill in 2010, most of her efforts in recent years have been focused on the private sector, building partnerships with food companies and retailers to sell healthier foods.

The child nutrition law also expanded feeding programs for hungry students. The rules being proposed Tuesday would increase that even further by allowing the highest-poverty schools to serve lunch and breakfast to all students for free. According to the USDA and the White House, that initiative would allow 9 million children in 22,000 schools to receive free lunches.

The USDA has already tested the program, which is designed to increase participation for students and reduce paperwork and applications for schools, in 11 states.

The Obama administration will also announce new guidelines for school wellness policies. Schools have been required to have general wellness policies that set their own general standards for foods, physical activity and other wellness activities since 2004. But the new rules would require parents and others in the school community to be involved in those decisions.