Put your pride aside: Olympic Medalist suffers from a common side effect of using opioid medication for chronic pain 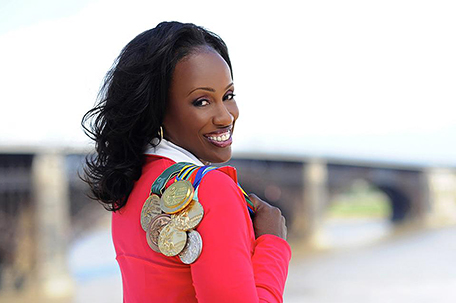 Six-time Olympic medalist Jackie Joyner-Kersee is a world heptathlon record holder, Sports Illustrated’s “Greatest Female Athlete of the 20th Century,” a philanthropist working to instill a love of sports in local communities and a woman used to living life at full throttle. In fact, the only thing that slowed her down was knee and ankle pain caused by a grueling training regime and years of Olympic competition. Like millions of other Americans, she was prescribed opioid medication to treat her chronic pain. While she was on opioid therapy, she experienced opioid-induced constipation (OIC), a side effect she described to be very uncomfortable.

Joyner-Kersee is not only speaking out on behalf of others with OIC, but also encouraging them to put their pride aside and share their experience with their family, friends and healthcare provider.

“After taking prescribed opioid treatment, I became constipated frequently – but I tried to ignore it,” says Joyner-Kersee. “As an athlete, you try to control everything you do, so when something is not right in your body, it’s hard to come to terms with it.”

Most importantly, constipation prevented Joyner-Kersee from doing what she loves; she found herself becoming sluggish and doing less physically because of the pain and discomfort she was experiencing.

Despite being in pain, feeling bloated and unlike her regular self, Joyner-Kersee says she didn’t mention anything to family, friends or her healthcare provider because she was in denial and felt embarrassed.

“Constipation isn’t exactly a conversation starter or something I wanted to talk about,” Joyner-Kersee says. “But it was taking such an emotional and physical toll that I finally had to work up the nerve to talk to my physician. It wasn’t until then that I learned I was experiencing what is called opioid-induced constipation or OIC.”

Symptoms of OIC may include reduced bowel movement frequency, straining, incomplete evacuation, and hard or dry stools. People suffering from opioid-induced constipation may also complain that they feel bloated or are experiencing abdominal pain and have difficulty producing a bowel movement. Sufferers may also feel like they need to use the bathroom but are unable to pass a bowel movement.

After receiving her diagnosis, Joyner-Kersee did her own research.

“I learned that OIC is its own type of constipation and can last for as long as I take opioids for my pain. Once I understood the condition, I talked to my physician about my treatment options,” Joyner-Kersee says.

She also suggests opening up to friends and family about OIC. “I understand that OIC may not be a topic people feel comfortable discussing, but my advice is to put your pride aside and talk to your physician. With something as personal as OIC, it really helps me to have a support system and people I can talk to.”

If you think that you or someone you care for may be suffering from OIC, talk to your healthcare provider. For more information about OIC, visit www.ohisee.com. Through personal stories, expert advice, and educational resources, this community aims to help OIC sufferers and their caregivers better understand and manage this uncomfortable condition.

Guidance, help and hope for those living with chronic pain