Poll Shows Impact of Opioid Crisis on Philadelphians and Their Neighborhoods 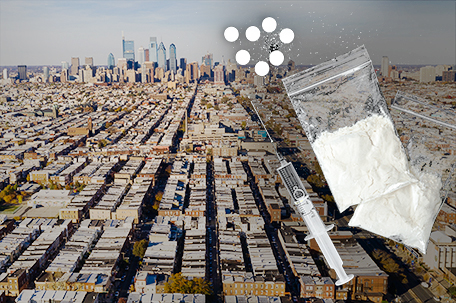 29% know someone killed by drug use; 41% say opioids hurt quality of life where they live

In recent years, Philadelphia has had one of the highest rates of death from unintentional drug overdoses among the nation’s largest cities and counties. In 2018, the city recorded 1,116 such deaths, 84% of them from opioids. The total had been slightly higher in 2017.

However, Philadelphia decision-makers have few reliable statistics regarding the full extent of opioid misuse in the city, including the impact of the crisis on the people and neighborhoods affected by the problem.

The Pew survey, conducted in the spring, addressed these topics. The findings show that about a third of Philadelphians have been directly affected by opioids in a variety of ways, whether it was knowing people who died, who are addicted, or who misused the drugs.

In addition, 41% said that the quality of life in their neighborhoods has been negatively affected by opioids, and 19% described that impact as major.

The poll documents the extent to which the opioid crisis is felt citywide. In many respects, the differences in responses to opioid-related questions among various demographic and geographic groups were relatively modest and often not statistically significant. Where differences existed, they indicated that the impact has been felt more by non-Hispanic whites, people 30 to 49 years old, and residents of the River Wards, which include the neighborhoods of Kensington, Fishtown, Bridesburg, and Port Richmond.

The Philadelphia poll, which also covered other topics, was conducted in two parts. One surveyed 600 residents by telephone — 402 by cellphones and 198 by landlines — from March 18 to 31, 2019. In the second part, city residential addresses were selected at random and contacted by mail in April; 490 people then answered the questions online, and another 213 filled out paper copies, with the last responses received May 15. The margin of error for the 1,303-response survey is plus or minus 3.7 percentage points.

The question about whether Philadelphians personally knew someone who had died from opioids did not specify a time frame for those deaths. Of the 29% who said they had, the number was significantly higher among Whites — at 40% — than among all other racial or ethnic groups.

A Pew analysis of data from the Philadelphia Department of Public Health published in March showed that 18% of the city’s opioid deaths from 2015 to 2017 occurred in Kensington and surrounding areas, with relatively high rates also in South, Southwest, and Northeast Philadelphia.

By age, 36% of 30 to 49 year-olds said they knew someone who had suffered a fatal overdose, the highest of any age group; only 19% of 18 to 29 year-olds said they did. Fifty-four percent of the 30 to 49 year-olds who knew someone who died were non-Hispanic whites, 28% were Black, and 18% were Hispanic. By way of comparison, 39% of all respondents in this age group were White, 40% were Black, and 21% were Hispanic. (The survey did not produce a statistically significant sample of Philadelphians of Asian descent.) When the responses were broken down by income, there was little difference among the groups.

In a national survey by the Kaiser Family Foundation in 2016, 20% of respondents said they knew someone who had died from an overdose of a prescription pain reliever; overdoses from heroin or illegally sourced fentanyl were not included.

In the Philadelphia survey, opioids were described as “illegal drugs such as heroin and [illicitly manufactured] fentanyl or prescription pain relievers such as Percocet, OxyContin, or Vicodin.”

In the poll, Philadelphians were asked whether and how they knew people who had misused opioids over the previous 12 months. They were given three options, from which they could select one or more: Were these people from their work, place of worship, school, or neighborhood, friends or extended family members, immediate family members, household members, or themselves? Thirty-five percent answered yes to the first category, 28% to the second, and 10 % to third. Most who knew someone in one category knew someone in another as well —  and sometimes in all three. The total percentage of respondents who knew at least one person who misused opioids was 40%.

When asked whether they knew anyone addicted to opioids, 31% said yes. Pew recognizes that the word “addicted,” which was used in the poll questions, may be seen by some as stigmatizing. The term was used because it is widely understood by the general public.

White Philadelphians (42%) and those ages 30-49 (39%) were among those most likely to report they knew someone who fit that description. By geography, the River Wards (40%) and South Philadelphia (37%) had the highest proportions of people who answered yes, while North Philly had the lowest at 23 %.

A nationwide poll conducted in April by National Public Radio and Ipsos, a global public opinion research firm, found similar results: 30% said they knew someone who has an opioid addiction.

When asked how opioid misuse has changed the quality of life in their neighborhood, 41% of Philadelphians said there had been a negative impact, and 19% descried that impact as major.

Sixty-four percent of those living in the River Wards, where the death toll has been highest, said that opioids have had a negative impact on their neighborhood’s quality of life, the highest percentage in the city. That area also had the highest proportion of residents who described the impact as major — 43%. Elsewhere, nearly half of those in Northeast Philadelphia said opioid misuse was taking a toll on their neighborhood; 18% saw that impact as major, and 31% said it was minor.

Over the last several years, Philadelphia city government has focused its opioid-related efforts on the River Wards neighborhood of Kensington. In October 2018, Mayor Jim Kenney issued an executive order that led to the creation of the Philadelphia Resilience Project, an effort to mobilize 35 city departments to react to the opioid crisis and provide resources for the affected residents of that area.

Larry Eichel is the project director and Meagan Pharis is a researcher with The Pew Charitable Trusts’ Philadelphia research initiative.

How Millennials view the opioid crisis