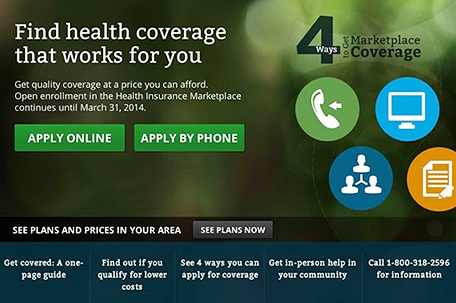 By Ricardo Alonso-Zaldivar and Jennifer Agiesta

The pattern illustrates why the health care law remains a favored target for Republicans seeking a Senate majority in the midterm elections.

The poll does have a bright spot for the administration: Those who signed up for coverage aren’t reeling from sticker shock. Most said they found premiums in line with what they expected, or even lower.

But even that was diminished by another finding: More than one-third of those who said they or someone in their household tried to enroll, were ultimately unable to do so. For the White House, it’s an uncomfortable reminder of the technical problems that paralyzed the HealthCare.gov website for weeks after it went live last fall.

The example of business owner Henry Kulik shows some of the cross-currents of public opinion.

Kulik is disabled as a result of Lou Gehrig’s disease, a condition that destroys the brain’s ability to control muscle movement. His family runs several stores that sell ice cream and other summer refreshments in the Philadelphia area.

Kulik says he doesn’t believe the federal government should require people to carry health insurance, as the law does. And he can understand worries about the cost to taxpayers. On the other hand, he’s been able to slash what his family pays for health insurance by purchasing coverage through the law’s new insurance markets and by taking advantage of tax credits to lower the premiums.

Before the law, his family was paying $2,400 a month. Now it’s several hundred dollars. And Kulik says the insurance for himself, his wife, and three children is comparable to what they had before.

“I think there is a lot of misinformation,” he says.

Obama’s health care law offers subsidized private coverage to middle-class people who have no health plan on the job, and it expands Medicaid to pick up low-income uninsured adults. But last fall’s launch of new health insurance markets was paralyzed technical problems. The debacle contributed to the departure of health secretary Kathleen Sebelius.

After Congress approved the law in 2010, a political backlash over its Medicare cuts, tax increases and new regulations helped Republicans win the House. This fall the GOP is following a similar strategy with the Senate at stake.

“Republicans hold an advantage on this issue among people who feel strongly about it,” said Robert Blendon of the Harvard School of Public Health, who follows opinion trends on health care.

Still, just 17 percent of poll respondents said the law will be completely repealed. While that represents an increase of 5 percentage points from March, the poll found that 67 percent believe the health law will be implemented with changes, whether major or superficial.

In Walhalla, South Carolina, digital publisher Greg Freeman says he’s no big fan of the president. But now into his late 30s, Freeman thought it would be a good idea to get health insurance through the new law. It took several tries to navigate the federal enrollment website, but Freeman says he’s generally satisfied. His main complaint is that his new doctor is about an hour away, in a bigger town to the east.

“I can see if some of the kinks can be worked out this could be a very positive thing in the long run,” Freeman said. “We should be in a position to be healthiest country in the world.”

The poll found that sign-up success translated into higher approval for the health care law. Among those who succeeded in purchasing coverage, 51 percent back the law, compared with 30 percent among those who tried to sign up and weren’t successful.

In the tiny coastal Oregon town of Reedsport, locksmith Marvin Plunkett says he’s disappointed that public opinion about the law remains so negative. He was able to gain coverage through the state’s expanded Medicaid program.

Plunkett recalled former Alaska Gov. Sarah Palin’s discredited charge that the law would set up “death panels” to judge whether seniors should receive medical care. “The truth about it is pretty mundane,” he said. “But the lies are really exciting and emotional.”

The AP-GfK Poll was conducted May 16-19, 2014 using KnowledgePanel, GfK’s probability-based online panel designed to be representative of the U.S. population. It involved online interviews with 1,354 adults, and has a margin of sampling error of plus or minus 3 percentage points for all respondents.

Many Americans incorrectly believe Health Law has been repealed