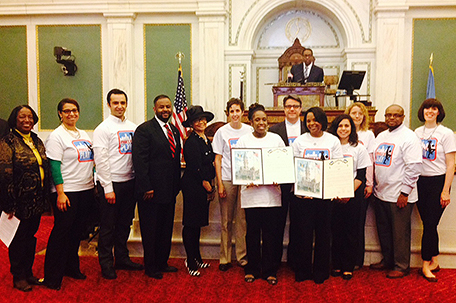 ABOVE PHOTO:  Members of City Council pose with staffers of the Philly Play Summer Challenge displaying their proclamations.  (Photo courtesy City of Phila.)

Philadelphia City Council kicked off the next phase of the popular Philly Play initiative by recognizing May as National Physical Fitness Month during the Thursday of Council meeting on Thursday. Philly Play is expanding from a program started by Councilman Bobby Henon (6th District) in 2013, the one that will offer children structured opportunities to learn about active play and nutrition at 10 targeted recreation centers across Philadelphia, one in each Council District.

“I’m thrilled to be working with my colleagues on Council and the Department of Parks and Recreation to promote play,” said Councilwoman Cindy Bass (8th District), Chair of the Committee on Parks and Recreation. “Philadelphia is bursting with free places to play and this is a great way for us to connect our constituents to those resources.”

At each of the 10 Philly Play sites, children will participate in special Philly Play programming including structured play time, skill building activities and interactive nutritional education with the Farm Explorer, a 20-foot mobile farm truck provided by Greener Partners. Philly Play programming will split between two groups: one-hour each day for kids already taking part in traditional recreation center summer camp and one-hour for kids who are not normally in those camps. Programming will vary based on each center’s specific needs, available space, resources and demand.

Councilwoman Marian Tasco, Chair of the Committee on Public Health, added that she is interested in participating in Philly Play because it looks at childhood obesity in a different light.

“Not engaging in physical activity at a young age can lead to numerous health issues later on,” Councilwoman Tasco said. “Nearly 1/3 of Philadelphia’s children are overweight or obese. Play – and having the opportunity to play, sets the table for a healthy adulthood.”

In addition to the recreational center programs, Philly Play will include separate Pop Up Play events around the City, with activities such as biking and swimming, organized through individual Council offices. The program will culminate in a Philly Play Summer Challenge event at the Vogt Recreation Center, where kids from around the City will show off skills they learned over the six-week program and compete at all skill levels.

“Philly Play is a wonderful spotlight on the hard work of our Parks and Recreation staff and volunteers. We’re excited to help bring Philly Play to as many Philadelphia children as we can,” said Micheal DeBernadinis, Deputy Mayor for Environmental and Community Resources and Commissioner of the Department of Parks and Recreation. Parks and Recreation, an active Philly Play partner, was instrumental in selecting the 10 pilot sites and will assist with Philly Play-specific staff in managing programming at each facility.

Philly Play was originally made possible through direct funding from Councilman Henon. Since then, the program has evolved into a public-private partnership to extend into the current pilot program.

Health Promotion Council, an affiliate of Public Health Management Corporation, is leading the programmatic design, implementation and coordination along with each Council office. Drexel University will also commit resources to evaluate the program’s effectiveness, particularly over the six-week programming at the camp sites. Henon, though appreciative of the wide support the program has received thus far, promised to continue recruiting support for the initiative.

“I’m the parent of two active young boys,” Henson said. “Frankly, they have the opportunities to be active and playing constantly, but not all kids in our City have those same chances. This is an opportunity for us to change that.”