New publication focuses on the decline of Black males in medicine 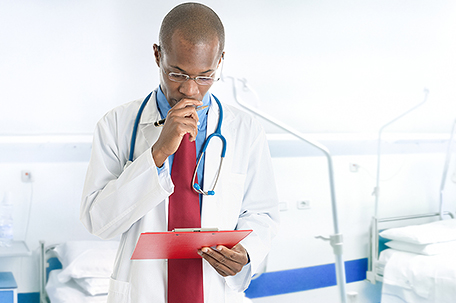 Detroit-Since 1978, the number of black males applying to and attending medical school in this country has declined, according to a new publication released by the Association of American Medical Colleges.

The report, Altering the Course: Black Males in Medicine, was presented at the National Medical Association’s (NMA) 112th National Convention in Detroit, the largest gathering of African-American physicians and health care professionals in the United States. Presidents of the nation’s historically black medical colleges and prominent leaders in the academic medicine community participated in a town hall to discuss the report and their perspectives on why there has been no progress.

To understand the reasons for the decline in black male applicants and enrollees, the AAMC report provides the perspectives of black pre-medical students, physicians, researchers, and leaders such as Louis W. Sullivan, MD, former secretary of the U.S. Department of Health and Human Services.  Interviews with these 11 individuals identify several major themes, including unequal K–12 educational opportunities, the absence of mentors or role models in medicine, public perceptions of black men, career attractiveness, and lack of financial resources.

“We have to redouble our efforts in the health professions to improve the talent pipeline of African-American males in order to have a physician workforce that is representative of the population,” said AAMC President and CEO Darrell G. Kirch, MD. “The nagging challenge of health disparities requires all the best minds and perspectives. Altering the Course is just the first step in identifying the problem. The AAMC looks forward to working with the NMA to begin implementing solutions.”

The report also highlights research and data from various sources to help explain the trends. Specifically, the report notes lower participation rates among black males in science, technology, engineering, and math fields, which affect the medical school applicant pool. It also cites a disproportionate number of young black men in underperforming K–12 public schools that often have fewer resources, which can lead to negative school experiences.

“Talent is universal, but opportunity is not,” said Marc Nivet, EdD, MBA, AAMC chief diversity officer. “To that end, we’re starting to see a national movement get underway to engage young black males. Not only are there several programs to address the issue, such as the White House initiative ‘My Brother’s Keeper,’ but academic medicine is working within the community and partnering with minority-serving institutions—the largest feeder schools to medical school—to help develop the next generation of physicians.”

Support networks, access to information, and pre-medical education programs such as the Health Careers Opportunity Program, Aspiring Docs, and the Summer Medical and Dental Education Program were identified as key factors that can contribute to success. Medical schools continue to play an important role by sponsoring pipeline programs to encourage minority students to consider careers in medicine.

Many medical schools also have updated their admissions policies and practices to foster a more diverse student body by undertaking holistic review of applications. This process takes into account other qualities beyond grades and test scores, such as an applicant’s personal characteristics, experiences, and attributes.

“Holistic review in admissions is an important part of the solution, but we need to have a bigger pool of black males applying to move the needle in a meaningful way,” said Nivet. “It is true that more black men are in college than ever before, but not enough of them are choosing the health professions as a career. We have to understand better why that is and lead the way in helping them see medicine as a rewarding and viable option.”