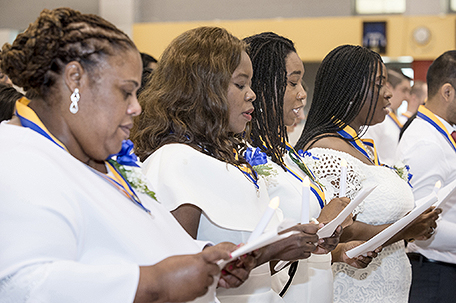 ABOVE PHOTO:  The nurse pinning ceremony from last year

At a time when the demand for nurses is increasing, Community College of Philadelphia is launching an accelerated program to allow individuals to earn a Nursing degree in 14 months. The deadline to apply is January 15, 2019.

Aimed at people who already have a bachelor’s degree, the Post Baccalaureate Accelerated Associate Degree in Nursing Option, which starts in May 2019, will allow students to earn an associate degree in Nursing, and qualify them to sit for the National Council Licensure Examination, a nationwide examination for the licensing of nurses in the United States.. In 2018, 95.65 percent of CCP nursing graduates who took the licensure exam passed.

More than 433,000 nurses will be needed by 2026, according to the U.S. Bureau of Labor Statistics, with employment demand growing by 15 percent. In Philadelphia, the median annual nursing salary is $77,052.

Prospective students must attend an informational session to learn how to navigate the application process. Sessions will be offered on Monday, Dec. 17 from 5 to 6 p.m. Both sessions will be held in Room C2-28 in the Center for Business and Industry, at 18th and Callowhill Streets.

The new program would have been ideal for Dan Larmour, now a nurse practitioner and adjunct instructor at the College.  Larmour had already earned his bachelor’s degree in public relations, spent time studying in London and embarked on a career in sales, when, unfulfilled at age 25, he decided to change his life and become a nurse.

Larmour, who had accumulated some student debt, enrolled in Community College of Philadelphia primarily because it was affordable, graduating in 2010.

“I now congratulate my students on making a smart decision” to come to Community College, Larmour said. “I tell them from the heart that this really is the path to possibilities. It was for me.”

Thirty percent of the College’s nursing students already have bachelor’s degrees when they enroll in the College’s two-year associate degree nursing program.

Because they’ve already had the foundational courses needed for a bachelor’s degree, incoming students in the new post-baccalaureate associate degree program will begin their nursing education by spending the summer in Nursing 101. They’ll continue with classes and clinical practice to graduate with an associate degree at the end of the following summer.

Barbara N. McLaughlin, professor of nursing and head of the nursing department, said that nursing students who had already earned bachelor’s degrees elsewhere had been willing to repeat their courses at the College. “They are willing to do this because, when asked, they tell us that they cannot afford the tuition at other fast track programs. CCP’s program would be significantly less expensive for these students and would enable the students to finish the program in 14 months,” she said.