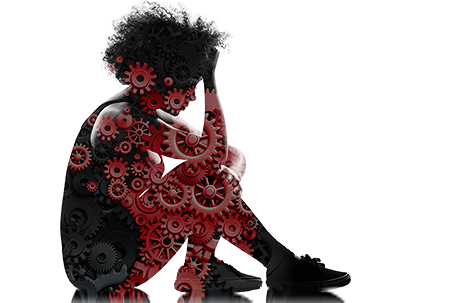 Too often, by the time African American women seek mental health treatment, the illness has progressed to a much more severe stage than is seen in other demographic groups. Resilience is a strength that develops through the experience of overcoming adversity, but there is a limit to what any of us can safely endure. The African American tendency to endure stress with more tolerance, while beneficial in certain circumstances, can also be maladaptive and much too painful to bear.

The limited use of mental health services by African American women suggests that there are too many women who are silently suffering. Depression is often accompanied with disturbances in memory, cognition and motivation, which can negatively impact occupational and academic performance. The more severe the depression, the greater the risk of suicide. African Americans in a suicidal crisis are also less likely to verbalize any suicidal thoughts.

Contrary to popular belief, suicides are rarely long-planned acts. Studies conducted on patients who survived suicide attempts show that 25 percent of the time the decision to suicide was made just five minutes before an attempt. Clinicians learn early on that even the most experienced practitioner can’t always predict or prevent suicides. In fact, it is estimated that an inpatient psychiatric nurse will lose a patient to suicide every two to three years. Hopelessness, alcohol abuse, excessive weight gain or loss and social isolation are common warning signs of severe depression.

Finding a culturally-competent practitioner with whom a sense of trust can develop is crucial for a successful outcome. Taking the time to do the necessary research on a potential provider is well worth the time spent. Below are three useful online resources with detailed information on mental health providers:

Although it is commonly held that more than 90 percent of suicides are associated with a history of mental illness, recent studies suggest that the association between the two may not necessarily be that high. After a number of successful and promising Norwegian men without any history of mental illness or depression committed suicide, a group of researchers conducted a small study and found that the men suffered from a fragile sense of worth. The researchers analyzed the suicide notes and performed in-depth interviews of family members and friends to better understand the reasons behind the suicides. Their entire self-worth was so dependent on their achievements that when they eventually encountered some sense of failure or rejection, they just couldn’t cope and saw suicide as the only way out. Though the study was based on a small sample of Norwegian men, it suggests a need for similar investigations on African American women who seemingly commit suicide without any history of mental illness.

Although a past history of a suicide attempt is a risk factor for another attempt, nine out of 10 patients who survive a suicide attempt do not go on to die from another one. Simply being present for those who are struggling while simultaneously encouraging the use of mental health services is sometimes all that it takes to help someone get through a vulnerable period.