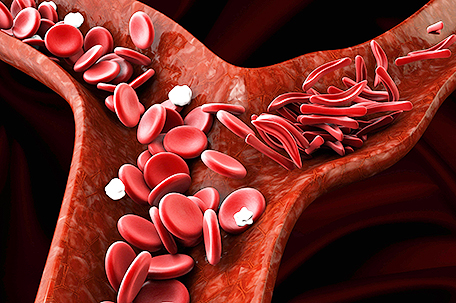 Black people with a trait for sickle cell anemia appear to have double the risk of kidney failure that requires dialysis, a new research suggests.

“Although you cannot change the genes you are born with, doctors can use this information to start screening for kidney disease earlier and to aggressively treat any other risk factors you may have such as diabetes or high blood pressure,” said study co-leader Dr. Rakhi Naik, an assistant professor of medicine at Johns Hopkins University in Baltimore.

Sickle cell anemia is an inherited disorder that affects hemoglobin – the substance in red blood cells that carries oxygen through the blood. This disease causes the hemoglobin to form in a sickle shape instead of the normal rounded disc shape, according to the U.S. National Heart, Lung, and Blood Institute.

To have sickle cell anemia, a person must inherit the gene from both parents. Someone who only has the gene from one parent is said to have a trait for sickle cell, but they won’t have symptoms of the disease.

Hemoglobin variants, such as the sickle cell trait and another one called the hemoglobin C trait, are more common in black people.

Previous studies have tied these variants to chronic kidney disease in Blacks. The study authors wanted to learn if these traits were also associated with kidney failure needing dialysis.

Naik and her colleagues evaluated data on almost 10,000 Black people. More than 700 had sickle cell trait and almost 250 had the hemoglobin C trait.

In nearly seven years of follow-up, kidney failure requiring dialysis developed in about 5 percent of study participants with sickle cell trait. In people with the hemoglobin C trait, just 2.5 percent developed kidney failure serious enough for dialysis. In those who didn’t have a gene variant, 2.6 percent had kidney failure needing dialysis, the research showed.

But the study didn’t prove a cause-and-effect relationship. It only showed an association between this gene variant and the need for dialysis.

Results of the research were published in the Journal of the American Society of Nephrology.

Sickle cell trait is found in 8 to 9 percent of Black people, the study authors noted. They suggested their findings have important public policy implications for genetic counseling for those with sickle cell trait.

“We still need more studies to determine if there are other treatments that can be used to slow the progression of kidney disease specifically in individuals with sickle cell trait,” Naik said in a journal news release.

Suffering from sickle cell anemia? Read up more on the condition on our Health Conditions tab on BlackDoctor.org.

Are you at risk for kidney disease?