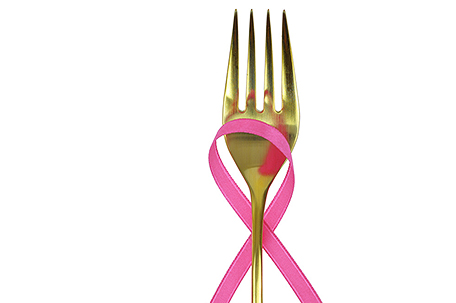 Diet is thought to be partly responsible for about 30 percent to 40 percent of all cancers. But diet alone is unlikely to be the “cause” or the “cure” of cancer. In the 1970s, the theory that a high-fat diet increased breast cancer risk became popular, and some people still believe that theory. Still, studies done since that time have offered mixed results.

The very large WHEL (Women’s Healthy Eating and Living) study was designed to see if a very stringent diet that was low in fat and high in vegetables, fruit, and fiber made a difference in survival or breast cancer recurrence (the breast cancer coming back) in women who had been diagnosed. The results were published in 2007 and showed that the diet had no effect on survival or recurrence, which surprised many people.

The final analysis of information from the Women’s Intervention Nutrition Study (WINS) suggests that a low-fat diet may improve survival in women diagnosed with early-stage, hormone-receptor-negative disease.

The research was presented at the 2014 San Antonio Breast Cancer Symposium.

One group was told to eat a low-fat diet and was asked to keep track of how much fat they ate. These women also were given nutritional counseling. The researchers made unannounced calls to the women once a year and asked for their fat intake records for the past 24 hours (975 women).

The other group ate as they normally did and weren’t given any nutrition counseling or told to follow a low-fat diet (1,462 women).

The women followed the low-fat diet for five years.

Overall, the women in the low-fat group reduced the amount of calories they got from fat by nearly 10 percent (from 29 percent to 20 percent) and lost nearly 6 pounds.

Overall, after more than 15 years of follow-up, the researchers found that the women who followed the low-fat diet had slightly better survival than women who didn’t follow the low-fat diet. Still, this difference wasn’t statistically significant, which means that it could have been due to chance and not because of the difference in diets.

But when the researchers looked at specific groups of women, they found the low-fat diet had a bigger impact:

Women diagnosed with estrogen-receptor-negative disease in the low-fat diet group had 36 percent better survival compared to women who didn’t change their diet.

Both of these differences were statistically significant, which means that they’re likely due to the differences in diet and not because of chance.

The researchers suspect that losing weight was probably more important to the better survival than the decrease in dietary fat.

The researchers also believe that the reason women diagnosed with hormone-receptor-negative disease got more benefits from the low-fat diet is likely to be very complex, and figuring out the exact mechanism would be difficult. They suspect it has something to do with the diet and weight loss reducing inflammation in the body, which can affect cancer growth.

If you’ve been diagnosed with breast cancer, it makes sense to do everything you can to ensure you’re as healthy as you can be to have the best outcome, including:

To learn more about healthy eating and eating to lose weight, visit the Breastcancer.org Nutrition section.