Kevin Exil aka Biggs Mula: Fighting sickle cell while fighting for his dream 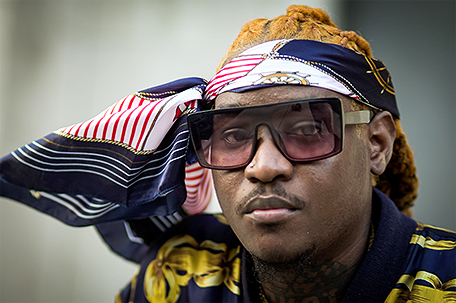 Additionally, the red blood cells of people with SCD die in about 16 days vs the normal 120 day cycle. Unfortunately, SCD is not discussed as often as it should be, considering the fact that 1 out of every 13 African Americans has the sickle cell trait… many of them are unaware that they have it.

31-year-old Kevin Exil aka Big Mula is a music artist who has been battling SCD since birth. After a series of life-threatening incidents earlier this year, Exil wanted to share his story in hopes of encouraging others who are battling with their own health conditions. Exil sat down with the SUN to discuss his story.

A Philadelphia transplant, by way of Brooklyn, Exil grew up in a family with a strong appreciation for music. Both his father — a musician who has released several albums — and his mother exposed them to various types of music from a young age.

“I have three sisters and one brother. Growing up, my mother and father played music every single day… hip-hop, pop music, Britney Spears, a little bit of everything”, he said.

Exil, who considers his music to be “melodic hip-hop,” began his artistic journey eight years ago. SCD has been a very present participant every step of the way.

Over the years Exil’s battle with SCD has progressively gotten harder, although he refuses to let it stop him from pursuing his music.

“At first my symptoms were just pain. For the past year and a half, sickle cell started affecting my hemoglobin levels… it dropped down to two,” he said. “Now I’m experiencing less pain, but hemolysis.”

Symptoms of hemolysis include, chest pain, shortness of breath, headaches, weakness and more.

“I’ve never been one to be depressed, but it definitely does something to you mentally,”Exil continued. “You feel like you’re eating good and doing everything right, and next thing you know, it happens out of nowhere. You still have things you have to do, like pay bills, which is hard to do when you’re always in the hospital.”

Opening up about such a personal physical and emotional battle is no easy task. Exil chose to share his story in hopes of bringing light to a disease he feels is not discussed often enough.

“Sickle cell is a big thing,” he said. “People talk about cancer a lot, but you never really hear about sickle cell. I feel like I have a platform and I can bring it to life, talk about it more and draw more attention to it. I’m tired of it being only this one month about sickle cell.”

“I think if sickle cell affected more cultures, instead of the high amount of cases we see in Black people, it would be getting more attention,” he continued. “My team and I are trying to bring more awareness to it.”

Exil aka Biggs Mula created the song “Save Me” as an ode to God for his gratitude for still being alive despite his ongoing health battles.

“This year, I almost passed from sickle cell, three times back to back,” he said. “I always had pain, but this was the first-time sickle cell almost ended my life. When I was in the hospital, I prayed a lot also for the first time. I kept telling the doctors to save me, but then I started saying that to God and He came through. That’s how the song came about.”

Exil and his team Rockstar Quality are determined to live every day to the fullest, like rock stars. He hopes to encourage others with a dream to do the same.

“I have sickle cell, but sickle cell does not have me,” Exil said. “I’m still a regular human being and I can do this. People with sickle cell are just trying to feel normal and feel like we can do what everyone else can do.”

“I also want to tell people who have sickle cell or that know someone who has sickle cell, to look at me. I’m doing it; you can, too, and I want you to do better than me. We can do it.”

Be sure to follow Exil on social media at:@biggsmula. Biggs Mula’s single “Save Me” is available on all streaming platforms. He also has a plethora of other music available for downloads. For more information on SCD, visit www.sicklecelldisease.org.

Twitter tightens limits on candidates ahead of US election

Tweet Share Pin Email What science says about how much daily walking actually makes you healthier By...

SUNscopes for the week of October 18

Tweet Share Pin Email All Signs: Oh joy! The week ahead looks great! (Of course, there will...

Tweet Share Pin Email BPT One of the many changes spurred by the COVID-19 pandemic is a...