Keeping Your Diabetes In Order 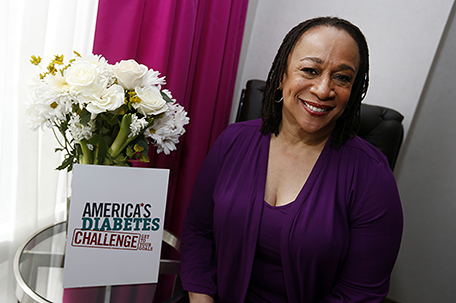 For people with Type 2 diabetes to avoid the complications that can arise from this disease, they need to know two separate, yet equally important numbers: the readings that they take every day, and the A1C (average blood sugar levels over a two to three month period) that are taken by their doctors.

To make sure that people with Type 2 diabetes meet their A1C goals, being proactive is key, said S. Epatha Merkerson, best known as Lt. Anita VanBuren on “Law and Order”. Talking with your doctor about the best ways to manage this important number can keep the complications at bay, she said.

“It’s not a one-size fits all thing,” Merkerson said. “You have to talk to your doctor about getting to your goal. Complications of diabetes are the fourth largest cause of death among African Americans, so it becomes important to know about your A1C.”

To help people learn all they can about ways to manage their A1C and by extension their Type 2 diabetes, Merkerson is working with the pharmaceutical company Merck on the America’s Diabetes Challenge: Get To Your Goals program.

As part of this, she’ll be joining thousands on the Benjamin Franklin Parkway in the American Diabetes Association’s Step Out: Walk To Cure Diabetes on Saturday. This year’s walk includes a health fair and celebrity meet and greet that features Merkerson, “The Voice” finalist Audra McLaughlin, race car driver Charlie Kimball, Andy Baldwin from “The Bachelor” and former Philadelphia Eagles lineman Hollis Thomas.

Walkers will get a special treat at the end of the walk in the form of a special performance from Philadelphia’s own Patti Labelle as part of the “Philly’s Freedom From Diabetes” Concert.

Merkerson was diagnosed with Type 2 diabetes 11 years ago, and like many people battling the disease knew its complications by watching family members go through them.

But while she’s made peace with it, getting there wasn’t easy, Merkerson admits. The key to meeting the challenge of making your A1C goal of 7 percent of less is to remember that it’s a process, she said.

“The way to meet your goal is different for everyone,” she said. “You may not always make it, but that doesn’t mean that you’re doing anything wrong.”

Among the ways that you can meet your A1C goals is through diet and exercise, something that’s sometimes tough to do when you’re an Emmy-award winning actress on a hit television show, Merkerson said. Negotiating the offerings on the “Law and Order” craft table required some adjustment on her part, she said.

“You have to train yourself to stay away from the things that are unhealthy for you,” Merkerson said. “It was a gradual process. I find that it’s better when you sit at the [dinner] table. When you sit down at the table and a meal is prepared, you eat better.”

Step Out: Walk to Cure Diabetes begins at 8 AM with the health fare and celebrity meet and greet. The walk begins at 9 AM and the Patti Labelle performance is scheduled for 11 AM. If you’d like to participate in the walk, go to http://stepout.diabetes.org.

Know the risks of type 2 diabetes