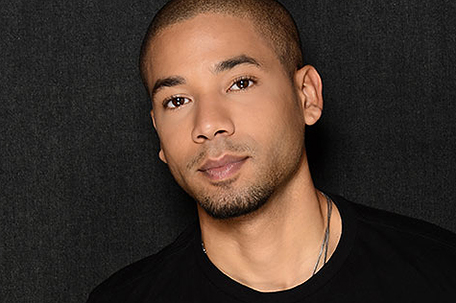 When Jussie Smollett was growing up, there were two things over which his mother gave him and his siblings no choice: “We weren’t allowed to choose whether we loved each other,” he says. “We also had no choice whether we were activists or not.”

That dedication to activism is a trait that the 31-year-old actor continues to nurture, and one of the causes he is most passionate about is easing the grip of HIV/AIDS on the Black community.

Smollett is riding high these days as one of the stars of Fox’s breakout television hit Empire. His character, Jamal Lyon, is the middle son of hip-hop moguls Lucious and Cookie Lyon, played by Terrence Howard and Taraji P. Henson. Smollett’s character, Jamal, has shed light on many of the challenges of being a Black gay man as he has struggled to overcome his father’s disapproval of his homosexuality. In March, Smollett announced to Ellen DeGeneres that he, like the character he plays, is openly gay.

Although it might seem that Smollett’s star has taken off in the last six months with “Empire’s” success, the actor is really a veteran in Hollywood terms. In 1993 he landed a role in the miniseries Queen, starring Halle Berry. He and his five siblings starred together in the ABC television series On Our Own in 1994. His sister actress Jurnee Smollett-Bell has been an AIDS activist, too. Other films he’s appeared in include The Mighty Ducks and North.

His work as an actor has been entertaining, but much of it has also served to educate and inspire. In 2012 he starred in the movie The Skinny, a film that peeks into the lives of five friends who reunite at New York Pride weekend. One of the storylines features a character getting tested for HIV and undergoing a regimen of postexposure prophylaxis (PEP) after having unprotected sex. When the movie premiered, Smollett and other members of the cast participated in a public service announcement produced by the Black AIDS Institute and the film’s director, Patrik-Ian Polk, titled “The Skinny Is Greater Than AIDS.”

Offscreen, Smollett has been working with the Black AIDS Institute since he was 15.

He’s passionate about taking the stigma out of HIV. On Feb. 7, in honor of National Black HIV/AIDS Awareness Day, Smollett participated in a panel discussion about that stigma at an AIDS Healthcare Foundation event.

While he has always stressed the importance of giving back, he recognizes that thanks to his celebrity status, more people are interested in what he has to say now. “Whether you’re talking to two people or 2 million people, you can change the world by being you,” he says. “But if millions of people are listening, shouldn’t you speak on the subjects that make the world a little bit better?”

Committed to the Cause

As a Black AIDS Institute board member, Smollett has used his platform to speak out about the importance of getting tested for HIV and understanding ways to prevent it.

For example, in February, Smollett appeared at the Black AIDS Institute booth at the CIAA Basketball Tournament, the largest HBCU basketball tournament in the country, which takes place every year in Charlotte, N.C.

Smollett is inspired by all the people who have taken part in the fight against HIV/AIDS from the beginning and is committed to doing his part to take up the torch. “We can’t allow this movement to die with the people who have died,” he says. If we forget, we “disrespect their memory and their legacy,” he adds.

The bottom line for Smollett is that anyone can make a difference, but collectively we can do much more to eradicate the threat of HIV/AIDS. “It’s so important that we know that Black lives matter and Brown lives matter and LGBT lives matter,” he says. “They say one is a minority, but if minorities came together, we would become a strikingly unbelievable majority.”

Tamara E. Holmes is a Washington, D.C.-based journalist who writes about health, wealth and personal growth.