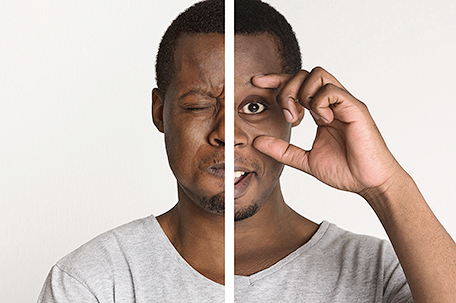 Every person, regardless of race or ethnicity, should seek help if they have a mental health problem or symptoms of a mental disorder.

Most African Americans with bipolar disorder are going undiagnosed and untreated.

Several factors have contributed to African-Americans not receiving help for bipolar disorder and other mental illnesses. Some of the reasons are:

Bipolar disorder often starts in the teen years, but can emerge in later life. It is a potentially life-threatening illness that a person cannot handle alone. Tragically, one of five people with bipolar disorder commits suicide. The signs of bipolar disorder include:

No one knows for certain what causes bipolar disorder. But its causes may include:

Brain chemistry – There are chemical changes or imbalances in the brain during both extremes of behavior (mania and depression).

Drug and alcohol abuse – More than half of the people diagnosed with bipolar disorder have histories of substance abuse. In some cases, substance abuse precedes the development of the problem; in others, alcohol or other drugs may be used as a form of self-medication.

Stressful or disturbing events – Both can cause mood swings

Bipolar disorder can be treated.

There is hope. People with bipolar disorder can be helped by treatment. Treatment can include:

ECT, or electroconvulsive therapy – This is used as a last resort to treat severe bouts of depression and suicidal thoughts. It’s only considered when medication and therapy haven’t worked.

If you think that you or someone you know has bipolar disorder, talk with your primary care physician or faith leader. However, only a mental health professional can tell if a person has bipolar disorder and properly treat it. Once in treatment, it is important that the person receive the support and understanding of friends and family. Many people also find strength and support through their religious and spiritual affiliations.

This fact sheet was made possible through an unrestricted educational grant from GlaxoSmithKline.

Your questions about bipolar disorder answered