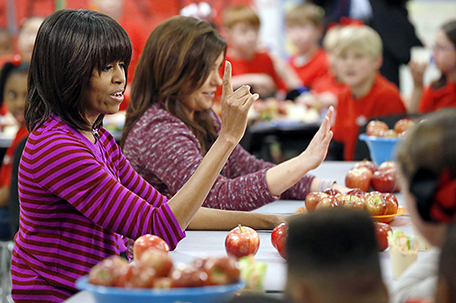 First Lady Michelle Obama last Thursday turned her annual garden harvest into a showcase for healthier school lunch standards and pledged to “fight until the bitter end” to keep them in place.

The House is soon to vote on a bill that would allow some schools to opt out of new federal requirements that school lunches include more whole grains, fruits and vegetables. The White House has threatened to veto the measure.

Mrs. Obama pushed for the new standards as part of her initiative against childhood obesity and, in recent weeks, has been unusually outspoken in her criticism of the effort by Congress to allow some schools to ignore them.

The first lady said the standards are important because kids get most of their nutrition from meals eaten at school.

Taxpayers spend billions of dollars a year to provide school meals, and Mrs. Obama said it’s their responsibility to make sure students eat well because research shows they do better in school as a result.

“I’m going to fight until the bitter end to make sure that every kid in this country continues to have the best nutrition that they can have in our schools, because these kids, all of these kids are worth it,” Mrs. Obama said. “They are absolutely worth it.

She held a White House event last month with school nutrition directors who said the standards are working in their schools. School nutrition directors also were on hand for Thursday’s harvest, which typically is attended by the students who helped plant the garden. The harvest, which marked Mrs. Obama’s latest push to protect the standards, was moved inside the White House because of rain.

Bowls of broccoli, cauliflower, peas and other vegetables were brought into the State Dining Room, where Mrs. Obama, the nutrition directors and members of the White House kitchen staff helped the students make a healthy lunch — of salad.

House Republicans, meanwhile, have for a second time delayed consideration of the agriculture spending bill that includes the provision to let some schools opt out of the healthier meal standards.

The House was scheduled to vote on the bill this week, but a final vote was again delayed after this week’s stunning defeat of House Majority Leader Eric Cantor, R-Va., in a primary election. Republicans say the bill won’t be considered until Cantor’s replacement is elected next Thursday. The opt-out language is not included in the Senate version of the spending bill.