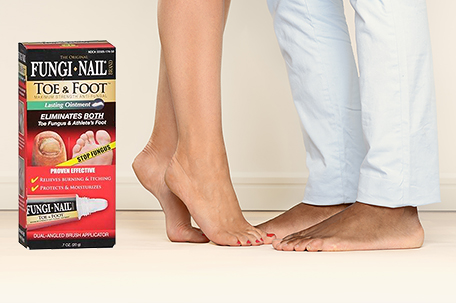 About 35 million Americans suffer from toe, finger, and athlete’s foot fungus, but some treatments aimed at curing the infection have failure rates as high as 93.5 percent.

People experiencing the discomfort and embarrassment of fungus want a cure – but unfortunately, that’s notoriously difficult to achieve. As the experts at the Mayo Clinic explain, fungal infections are typically caused by dermatophyte fungi that thrive in warm and moist conditions. The risk of reinfection can be reduced by occasionally wearing open-toe footwear and discarding old shoes, which can harbor fungi that cause reinfection.

Infected areas can be thickened, brittle, ragged, distorted, and dull, combined with pain, itching and burning, and a foul odor. Toe, finger, and foot fungus can be potentially serious for diabetics or people with poor circulation, but every sufferer wants to be rid of it.

Why is fungus so hard to kill? One major reason is that the nail isn’t the source of the problem. It’s a common misconception that the ugly, even painful, nails are infected – but it’s the nail bed beneath, and the skin around the nail, where the fungi actually live. It takes time for an anti-fungal treatment to root out the infection, and reinfection rates are high.

The best way to treat the underlying condition is to connect with your pharmacist or doctor, who will tell you that the fungus must be removed from the skin around and beneath the nail, as well as on other areas of the toes, fingers, and feet.

One over-the-counter product that has been the #1 pharmacist-recommended brand for over 18 years is Fungi-Nail(R) Toe & Foot(R). It treats the underlying fungal infection, helping to eliminate it and reduce the chance of reinfection – and kills the fungus on contact, as well as working to soothe and heal irritated skin.

Overall, each fungus sufferer is different, and what may work for one person may not work for someone else. The best and first thing to do to win the battle against fungus? Talk to your pharmacist.