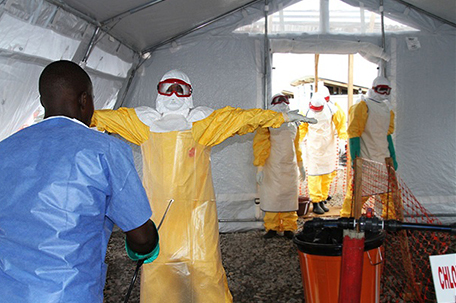 American scientists are more concerned about an Ebola pandemic; scientists in Europe and Africa are more optimistic about control of the diease.

Last week, the first person to be diagnosed with Ebola in America succumbed to the disease. Thomas Eric Duncan, a Liberian living in Dallas, TX, died just hours after doctors listed his condition as critical.

Duncan entered the hospital demonstrating all of the tell-tale signs of Ebola infection: a high fever and persistent diarrhea. Upon a confirmed diagnosis, Duncan was immediately put on a ventilator and dialysis.  Duncan’s symptoms began to go into remission and doctors and family optimistically believed that a viable treatment had been found.

But, that optimism soon faded to black.  Duncan’s death has sparked fears among American disease control experts and pathologists that this is only the beginning of a wider pandemic.

The Ebola virus has been around for some time now. As early as 1995, British and Italian health workers in Africa have been aware of its presence. In Zaire, doctors and scientists noted the effects of a heretofore unknown infection. A mission hospital in the Zairean capital of Kinshasa became the focus of intense scrutiny when Italian nuns began to notice severe symptoms among residents of a small suburban town on the outskirts of the capital.

Scientists observing the progress of Zairean outbreak believed that the virus would run it’s course and quickly dissipate—but, even so, medical personnel experienced in dealing with the virulence of AIDS in Africa remained skeptical.

The virus causes horrendous damage, as it attacks the internal organs, resulting in extensive bleeding, vomiting, and diarrhea. As of now, many experts working in Africa do not believe that the disease is highly contagious and that  it can only be caught by close contact with an infected person’s body fluids.

Researchers in America are not so convinced that the disease is such a difficult transmit. According to an article appearing in the Los Angeles Times this week, some Ebola experts worry that the virus many spread more easily than assumed.  Because there hasn’t been enough time to suss out the entire viral mechanism as of yet, CDC researchers aren’t ruling out the possibility that the virus can be an airborne disease that spreads easily in tight quarters.

“We just know enough yet,” said Dr. Julie Yamashita of the CDC Infectious Disease Unit. “Clearly, Ebola moves easily through populations, but what it’s most efficient mode of transmission is, we’re not sure—and, with a disease as virulent as this one apparently is, nobody wants to make speculative postulations…”

Scientists in Europe and Africa believe that the present epidemic in Zaire will quickly run its course, provided basic precautions are taken in dealing with the sick. Sterilization equipment, however, is in short supply in the developing world, where syringes and needles are often reused.

We have more facilities germane to containing infectious diseases her in the U.S.,” said  Dr. David Lakey commissioner of the Texas Department of State Health Service. “But for one family, this has been a personal struggle. WE did everything we could here at  the Prebyterian Hospital. Doctors and nurses were very committed to saving Mr. Duncan’s life. But Ebola is a disease that attacks the body in many ways.  We have learned a lot from this episode and we continue to do everything in our power to prevent the spread of the disease and develop strategies to prevent more people from falling victim to it.”

Adebayo Adeniran, a London, U.K. businessman of Nigerian descent with holdings in a shoppimg mall complex in Lagos, Nigeria, says that the Ebola scare has frightened off potential investors.

“I had investors lined up in London who were very interested in my project in Lagos,” says Adeniran. “Now, because of the Ebola scare, many of these investors have backed off, rescinding their offers. This is a killer for so many people in the capital who really, really need a facility of the type I have proposed. Once again, Africa suffers because of the inordinate fear of Westerners who are more than happy to exploit African resources—but back off when the situation gets a little challenging.”