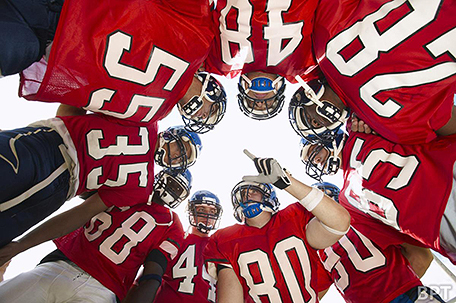 You’re spending your nights standing on the sidelines, cheering your daughter as she dribbles a soccer ball across the field. Or maybe you’re cheering on your quarterback son as he yells “hut” at a football scrimmage. The school year – and its associated sports – is an exciting time. But with that excitement comes the risk of traumatic injuries – including concussions.

Concussions are generating a lot of attention these days as an increasing amount of research highlights the difficulties in treating them.

To this end, the American Academy of Neurology (AAN) has developed Sports Concussion Guidelines – available in both English and Spanish – to help coaches, schools, parents and athletes better understand concussions, and when an injured athlete should be allowed to return to play. The guidelines cover the following:

Players: Concussions can happen in any sport and at any time during the season. A concussion can occur when the head hits, or is hit by, a solid surface. It can also happen when the head’s motion is stopped suddenly, even if it doesn’t strike, or is struck by, a solid surface. If you witness changes in the behavior or personality of a player on your team, or if you see them giving a blank stare, acting disoriented, suffering from memory loss or even vomiting, ask the player if he/she was involved in a collision. Alert your coach if you witness or are involved in any violent contact while on the field.

Parents: Educate yourselves about the signs of a concussion, as you know your child best when he/she might be exhibiting unusual behaviors. Download the AAN’s concussion reference sheet for parents, coaches and players at AAN.com/concussion, and share with your young athlete your concerns about him/her playing with a head injury. While cheering for your child in practice and in games, keep an eye on the play for any potential head collisions and report anything significant that may have been missed.

Coaches: Have a conversation with your players about the dangers of concussions, and communicate clearly that they can happen in any sport at any time. The AAN offers a Concussion Quick Check mobile app to help coaches, parents, and athletic trainers quickly identify if a player is exhibiting signs of a concussion. Additionally, listen to your players if they are talking about someone having taken a hard hit. Enforce the rule that players should not be allowed to return to play following a head injury until they are evaluated and cleared by a physician.

Physicians: Concussions are also generating more attention in the medical field. Physicians are ethically obligated to safeguard the current and future physical and mental health of the student athletes they treat, whether the student has a concussion or not. This includes providing parents and athletes with information about concussion risk factors, symptoms and discussing the potential for long term brain health effects from repeated blows.

“Brain disease threatens to steal from us what makes us human,” says retired NFL player Ben Utecht, who suffered five known concussions during his football career and is now the spokesperson for the American Academy of Neurology and its foundation, the American Brain Foundation. “I will fight relentlessly to see that through research we can in fact find the origins of healing through the cures that are waiting to be discovered.”