Most vulnerable still in jeopardy as COVID precautions ease 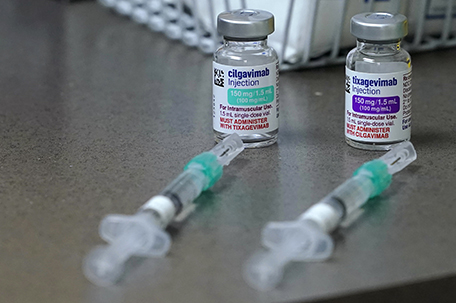 ABOVE PHOTO: Bottles and syringes holding a two-shot dose of AstraZeneca’s Evusheld, the first set of antibodies grown in a lab to prevent COVID-19, rest on a table, Thursday, Jan. 20, 2022 at a University of Washington Medicine clinic in Seattle. The drug is supposed to give immune-compromised patients who can’t make their own virus-fighters some protection against COVID-19 for six months. (AP Photo/Ted S. Warren)

Two years into the pandemic Jackie Hansen still left home only for doctor visits, her immune system so wrecked by cancer and lupus that COVID-19 vaccinations couldn’t take hold.

Then Hansen got a reprieve — scarce doses of the first drug that promises six months of protection for people with no other way to fend off the virus.

“This is a shot of life,” Hansen said after getting injections of Evusheld at a University of Pittsburgh Medical Center clinic. She can’t wait to “hug my grandkids without fear.”

Up to 7 million immune-compromised Americans have been left behind in the nation’s wobbly efforts to get back to normal. A weak immune system simply can’t rev up to fight the virus after vaccination like a healthy one does. Not only do these fragile patients remain at high risk of severe illness and death from COVID-19, they can harbor lengthy infections that can help spark still more variants.

With more of the country now abandoning masks and other precautions as the omicron wave ebbs, how to keep this forgotten group protected is taking on new urgency.

This is “quickly transitioning into an epidemic of the vulnerable,” said Dr. Jacob Lemieux, an infectious disease specialist at Massachusetts General Hospital. While healthy vaccinated people may return to pre-pandemic activities with little worry about severe consequences, “the immunocompromised — despite vaccination, despite taking all precautions — cannot, and remain at risk.”

“We’re going to have to navigate this as a society and it’s going to be a really difficult societal conversation,” he added.

Indeed, amid all the talk about omicron being less severe for many people, the most contagious variant so far laid bare how the immune-compromised need more defenses.

“The pandemic has not spared them yet,” said Dr. Ghady Haidar, an infectious disease specialist at UPMC, where people hospitalized with serious COVID-19 over the past month have been a mix of the immune-compromised and the unvaccinated.

Hansen, a retired nurse, has had to have tough conversations about why she can’t be around anyone who’s not vaccinated.

“Other people’s behaviors really affect and jeopardize the lives of people like myself,” said Hansen, who nearly died from the flu shortly before the pandemic began.

“We’re all tired of wearing a mask, everybody just wants to put it behind us,” Hansen said. But while for most people “‘it’s an annoyance to put a mask on to go to the grocery store,” she’s had to fight to get her cancer care scheduled during COVID-19 surges.

There aren’t many options for the immune-compromised as community-wide COVID-19 precautions wane. Health authorities are pushing a fourth vaccine dose for these vulnerable patients, since some get at least a little protection from repeat vaccinations.

The immune-compromised are supposed to get three up-front doses of the Pfizer or Moderna vaccines followed by a booster, one more shot than the U.S. recommends for everyone else.

The Centers for Disease Control and Prevention also is considering if the immune-compromised need their booster a little sooner — three months after their last shot rather than five months.

But many patients are anxiously awaiting AstraZeneca’s Evusheld, the first set of antibodies grown in a lab to prevent COVID-19 — rather than treat it — in people who can’t make their own virus-fighters. Evusheld contains two types of antibodies, given in two shots at the same appointment, that are expected to last for six months.

The problem: There’s not nearly enough to go around. A federal database shows nearly 500,000 of the 1.2 million doses the government has purchased have been distributed, and an AstraZeneca spokesperson says the rest should arrive before April.

Without enough for everyone deemed immune-compromised, many hospitals used a lottery system to dispense doses to their highest-risk patients — and no one knows what will happen later in the year when those people need another dose.

A study found Evusheld cut by 77% the chances of a COVID-19 infection, although that was before omicron appeared.

While that’s not perfect protection, one organ transplant recipient credits his Evusheld dose with preventing him from becoming seriously ill.

Just getting to the Evusheld appointment at a University of Washington clinic in Seattle, over an hour from his home, made Ray Hoffman nervous. He takes strong immune-suppressing drugs after recent liver and kidney transplants and never ventures out without his mask — but wound up with a masked but coughing cab driver. The next day Hoffman developed cold-like symptoms that turned out to be mild COVID-19, and his worried doctors told him the protective antibody injections likely made the difference.

“I’m just really happy that, fortunately for me, it was just a couple of days of feeling pretty bad and then that was the worst of it,” he said.

Hansen, the suburban Pittsburgh patient, knows she can’t completely let down her guard but says Evusheld has eased her crippling fear.

“Maybe I can go out for lunch, maybe my husband and I can go do something instead of just sitting here in the house,” she said. “This drug needs to be made more available. It’s a great victory for me but until everybody else that’s compromised gets it, it’s hard for me to celebrate.”