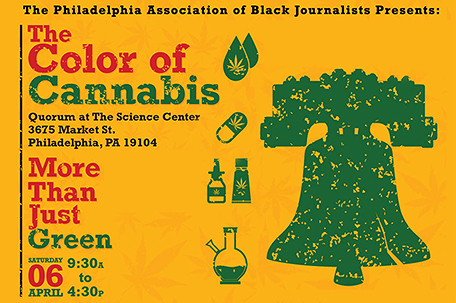 The Philadelphia Association of Black Journalists (PABJ) will assemble more than 100 journalists, legislators, patients, and community community leaders for “More than Just Green: The Color of Cannabis,” an educational engagement conference starting at 9:30 a.m. on Saturday, April 6, 2019 at Quorum at the Science Center, 3675 Market Street, Philadelphia, PA 19104.

The event will continue to reverse the stigmatization and misinformation on cannabis, which has plagued communities of color for generations, and underscore the importance of why media, medical, legislative and community-based professionals need to be more aware, informed and involved in legalization discussions developing right now in our state.

Tauhid Chappell, a medical marijuana patient and PABJ secretary, has gathered experts from around the country to underline the importance of this event.

“We don’t see enough media coverage that reports how cannabis legalization impacts communities of color,” Chapell said. “There isn’t consistent discussion on the lack of diversity in the cannabis industry, how Black and brown entrepreneurs struggle to create their own cannabis businesses and how people of color, who’ve been disproportionately impacted by the War on Drugs, continue to be barred from entering the legal market due to past marijuana convictions. It’s our duty as media professionals in a majority minority city to highlight these issues, address drug prohibition’s violent and racist past and underline how ongoing legalization efforts could help, or continue to hurt, local communities who continue to be disenfranchised by current drug prohibition laws.”

A limited amount of public tickets remain and are available at www.phillycolorofcannabis.com.

Newsrooms continue to cut black journalists from their ranks