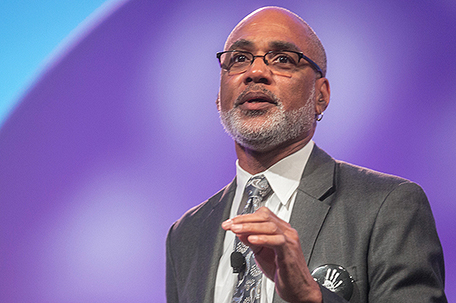 As part of a new strategic plan to prepare for the next generation of Black HIV/AIDS response, the Black AIDS Institute recently announced several organizational changes, including the retirement of long-time president and CEO Phill Wilson.

Wilson launched the Black AIDS Institute in 1999 with a clear mantra (“Our People, Our Problem, Our Solution”) and mission, “to stop the AIDS pandemic in Black communities by engaging and mobilizing Black leaders, institutions and individuals in efforts to confront HIV from a uniquely and unapologetically Black point of view.

“In order for a movement to endure, there must be a plan for the future,” Wilson said in a statement. “Stepping down as the President and CEO of the Institute, where I have had the privilege of serving for the last 19 years, is bittersweet for me. I have been involved in this fight for almost my entire adult life.”

The statement continued: “In 1983, when I started doing this work, none of us could have imagined this mysterious new disease, first identified at U.C.L.A. Medical Center, would become the defining health issue of our generation. We are at a turning point. Are we are going to build on the remarkable advances we have made over the last decade and continue to push forward and finally end of the HIV/AIDS epidemic or are we going to go back to the dark days of despair and death?”

In the statement, Wilson said that the Institute is committed to doing everything in its power to end the HIV/AIDS epidemic, especially in Black communities.

“The time is right. The organization has the infrastructure and capacity to do the changes set forth by the Board to prepare for a new generation of capacity building, advocacy, mobilization and service delivery,” said Wilson. “I am very proud of the work we have done over the last 19 years and of the organization’s commitment to new leadership. That commitment is more important now than ever before.”

Pursuing new executive leadership is a part of a larger effort on the part of the Institute to prepare for the next generation of HIV/AIDS response in Black communities.

Ahead of the Curve

From the African American HIV University (AAHU) and Black Treatment Advocates Network, to the ground-breaking State of AIDS in Black America reports and acknowledgements of Black excellence at the annual “Heroes in The Struggle Awards Gala,”the Institute has been relentless in its focus on Black communities.

The organization enlisted Traditional Black Institutions, such as the NAACP, Black fraternities and sororities, Black journalists in mainstream media and Black-owned publications, and others, to commit to raising awareness, fighting stigma, increasing HIV/AIDS literacy and mobilizing Black people. It launched the Black Hollywood Task Force on HIV, currently co-chaired by Jussie Smollett, star of the FOX musical drama “Empire,” and veteran actress and humanitarian Vanessa Williams, to leverage the power of celebrity to amplify messages about prevention, testing, treatment and ending stigma.

“We have always been ahead of the curve in understanding HIV/AIDS and how it relates to the Black community,” said Institute board chair Grazell Howard. “This change is a continuation of that legacy. The search for new executive leadership is a part of a new strategic plan. We have brought on new board members like Rep. Donna M. Christensen (retired), Dr. David Cook, David Munar and Gina Brown to help us with expand our policy work, our clinical services and add Black-women programs, respectively. We’ve also re-energized our Black Hollywood Task Force on AIDS with new ambassadors and supporters like Ledisi, Karamo Brown, Taraji P. Henson, Alfre Woodard and Van Jones.”

Board member David Munar — the president and CEO of the Howard Brown Health Center in Chicago — states “almost every milestone in the fight against AIDS domestically, and in some cases internationally, has been paved by the Black AIDS Institute, and that’s a credit to the Institution and its many supporters and affiliates across the country.”

Wilson leaves the Institute well positioned to take on the challenges of future.

The organization is staffed by the next generation of HIV/AIDS activists and organizers, whose work embodies the Institute’s commitment to helping Black communities save themselves through their lived experience.

“Every day is Black AIDS Awareness day at the Black AIDS Institute’” said Raniyah Copeland, the Institute’s Director of Programs. “Our staffers are of the communities we serve. We are Black men and women. We are Black people living with HIV/AIDS or at high risk of infection. We live, work, pray and play in the communities we serve. We don’t need to do ‘outreach’ because we are there 24/7.”

The Institute recently brought on new staff to strengthen their capacity, like Maxx Boykin (previously with AIDS Foundation of Chicago) to work on a new advocacy and policy initiative, Maya Merriweather to work on mobilization, and Saron Selassie to strengthen the Institute’s monitoring and evaluation work. On World AIDS Day, the Institute launched a new website and a redesigned Black AIDS Weekly, the organization’s electronic newsletter, to more effectively reach people who use smartphones to access health information.

Jesse Milan — president and CEO of AIDS United and chair emeritus of the Institute’s board — notes that the Institute has also been developing programs to help end the epidemic through its Los Angeles-based direct service efforts. On February 7, National Black HIV/AIDS Awareness Day, the Institute, in partnership with St. John’s Well Child & Family Center, a federally-qualified, community health center in Los Angeles, launched the first Black PrEP clinic in Los Angeles. Later this spring, the partnership will open a Black men’s primary care clinic in the Leimert Park area of L.A. A Black gay men’s drop-in center will launch in Compton during the fall.

“The PrEP clinic, the men’s primary care clinic and the Black gay men’s drop-in center will help us achieve a new dimension of our mission,” Milan said.

“We are proud to build on Phill’s bold and unapologetic legacy through direct service, new policy, initiatives to address Black women and HIV, and other efforts that will codify Phill’s vision of ending AIDS,” ssaid Copeland.

Rather than resting on past successes, the Black AIDS Institute is “going where the epidemic’s trajectory is calling it to go,” said Munar, who calls the new initiatives “excellent examples” of how the organization is transforming in ways that will allow it to thrive without Wilson at the helm. “It’s exactly what every community needs to be doing. BAI wants to do it first in its own backyard, then help others across the country replicate similar strategies.”

“Such approaches are particularly important in the South,” National Capacity Building manager Leisha McKinley-Beach said. “The Institute has become one of the driving forces for ending the AIDS epidemic in America due in part to its work in southern states, where most Blacks live, and awareness-raising about what’s happening there. We have been on the frontline of training and capacity building in the South. I am particularly excited that we are going to be housing our policy and advocacy work in the South and looking forward to having Maxx join me in Atlanta.”

“We can’t achieve our goals in the HIV/AIDS epidemic nationally unless we work harder in the South to reduce new infections, bring more people into care and eliminate stigma and discrimination,” said Milan. “The statistics and reality in the South are dire, especially for African Americans and we must focus on them now.”

“For those of us who have been doing the work and standing with Phill shoulder-to-shoulder for many years, it will be hard to imagine this work without him,” said Munar. “But this transition is not about Phill Wilson, it’s really about a mission, a vision, a commitment to mobilize a community, to leverage influence wherever we can, to eliminate AIDS and make this world a better place for people who are affected by HIV.”

“It is with great pride and role modeling that the Black AIDS Institute shows that you can have an organization that can grow a budget, have a vibrant and fully-engaged board of directors and be founded by a brilliant, courageous, creative man who knows when it is time to pass the mantle,”said Howard.

“This is an important moment,” Munar said. “Phill is passing the baton onto a newer generation. He’s leaving the organization on a strong footing so that it can continue to march forward.”

Freddie Allen is the Editor-In-Chief of the NNPA Newswire and BlackPressUSA.com. Freddie is also a frequent contributor to the Black AIDS Weekly. You can follow him on Twitter @freddieallenjr.

The Beginning of the End of AIDS