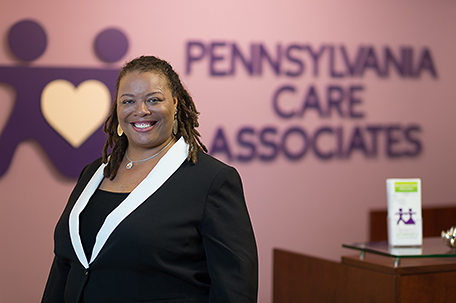 Through the Pennsylvania Care Health and Wellness Festival, Tomika McFadden hopes to make the community healthier.

When West Philadelphia native Tomika McFadden founded Pennsylvania Care Associates in 2012, it was a management consulting firm. Now, it serves the community as a health services corporation, and as the organization in charge of the Pennsylvania Care Health and Wellness Festival.

Created in 2016 as part of a contract with the Commonwealth’s Department of Health and Human Services to provide services for individuals with disabilities, the Pennsylvania Care Health and Wellness Festival gives participants the change to take care of themselves while having a good time.

The Pennsylvania Care Health and Wellness Festival is the nation’s largest urban health and music festival. The event —- which was created in 2017 and is the largest of its kind in the nation — is bigger and better than ever in its second year.

McFadden sat down with the SUN to discuss her brainchild and her goal of changing how people think about health and wellness.

McFadden has always had a heart for giving and a desire to give back to those in need. Her journey to the creation of the Pennsylvania Care Health and Wellness Festival was one that was birthed from that love.

“I’ve been a community activist for 20 years,” she said. “I’m a single-parent raising three children with disabilities, and it’s a struggle. I have always believed in leading by example. I was always one of those parents that got out there and empowered my community, women and families on how to strive, grow and balance their careers, families and businesses. Doing that for 20 years has led me into becoming a businesswoman and now a philanthropist. I feel like the health component really was triggered by the fact that I’m raising children with disabilities, as well as my son passing away from a physical disability.”

McFadden has successfully found a way to transform her triumph and hardships into a vehicle to help other families and members of the community in need. She shared her reason for creating the festival.

Conversations about health often lead to the misconception that a healthy lifestyle requires too much work. That notion, paired with a resistance to change, can result in people not taking the necessary steps to making healthier choices. Health is something many of us take for granted and don’t often think about until we are faced with a crisis of sorts.

McFadden hopes to shift the conversation about health by encouraging people to take the first step in becoming active participants in their health care. Her vision for the health and music festival was sparked by seeing the necessity of making information about healthier choices readily available to everyone.

“Coming from the community myself, sometimes the healthy lifestyle can seem too overwhelming and stressful, especially when people think about diets,” she said. “Over time, I’ve incorporated living a healthier lifestyle myself. I found ways to make it interesting for me and I wanted to find ways to make it interesting for the community. We all love music, we all love dancing, so it’s like ok… let’s have this music and health festival. Let’s have these two things that bring people out and let’s get them interested. At the same time, they’re up, they’re moving and they’re participating.”

“There are double-dutch competitions, Zumba and we’re giving tips and pointers on how to live healthier,” McFadden continued. “We’re exposing people to opportunities to get screened, as well as introducing them to resources for follow-up care. We wanted to make sure it was a whole family focus, because it begins with our youth. We made sure we have activities for children all the way up to seniors.”

In addition to a wide array of activities, the Pennsylvania Care Health and Wellness Festival also offers diabetes testing, high blood pressure testing, dental screenings, audio screenings and vision screenings. Chestnut Hill Medical Associates and CHOP will also be participating. CHOP will be sharing information on injury prevention, as well as gift tools to families (such as bicycle helmets) to help aid in safety precautions. The Pennsylvania Care Health and Wellness Festival offers tangible resources, while simultaneously encouraging people to make changes to their lifestyles.

McFadden paid homage to her roots, hosting the festival in the neighborhood where she grew up. Last year’s event was held in Malcolm X Park in West Philadelphia, and the festival will return to the same location this year. Last year’s musical line up included Dru Hill, The Delfonics Review, Lenny Williams, and Howard Hewitt.  This year’s festival features music from Denise Williams, Keith Washington and Ruff Endz. The festival will culminate on Saturday, July 28th, with live performances at Penn’s Landing by SWV, Estelle, Sister Nancy, Suzann Christine, Beano, the return of Lenny Williams and Dru Hill, with T.I. as the headliner from 12pm-8pm. In addition to the incredible line up of artists, this year’s festival expanded to a week filled with activities. McFadden spoke about her decision to extend the festival.

“The need is there!” she said. “We saw such great success last year in the park; over 4,000 people participated. We thought this could really expose the community to even grander and greater opportunities, so we wanted to expand the event. Basically, it’s a healthy living tour and the finale at Penn’s Landing could possibly include 20,000 people or more. It’s a really great opportunity to get Philadelphia, as well as Pennsylvania and the tri-state area, on board with living healthier. I’m really curious to see if we can make living healthier become a fun trend.”

McFadden expressed gratitude for the help of her team, as well as her hopes for more health-based initiatives in the future.

“Putting together this event wasn’t an easy task, but Felicia Harris and Haniyyah Sharpe-Brown have been such a great support in helping me put this together,” she said. “I would like to spotlight the fact that it took “Black girl magic” to really pull this event together, and we hope to continue with this trend as well. When people see more people in the community come together, then other people can make more things like this festival happen in their communities.”

All of the Pennsylvania Care Health and Wellness Festival events are free and open to the public; the only requirement is that you register for each activity you wish to participate in. To register and to see the full line up of events, visit pahealthfest.org. Also, be sure to follow @bewholehealth on social media for updates and use the hashtags #LetPACare, #BeWholeHealth and #PAHealthFest to share your experience.