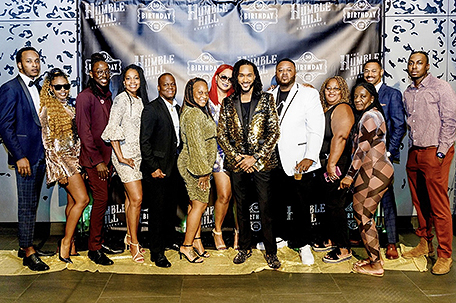 ABOVE PHOTO: Alex and Clifton with some of their many supportive family members. (Photo/Dorian Le’Grand Photography)

SCD is an inherited group of blood disorders that cause red blood cells that are normally round, to become c-shaped like the farm tool called a sickle. The abnormalities in the hemoglobin of a person with SCD can cause a myriad of health issues including but not limited to anemia, extreme pain, a higher propensity for infection, and the increased potential for a stroke. According to the CDC, SCD affects about 100,000 Americans, and approximately 1 in 13 African American babies are born with sickle cell trait (SCT).

Despite the statistics for SCD, there continues to be a lack of comprehensive care available for the disease. Alex Hill, the founder of Humble Hill PR, and his cousin Clifton Ray Kirkman II — who is a Sickle Cell Warrior — are doing their part to spread awareness about SCD in innovative ways.

Hill, a Detroit native, realized at age 13 that his love for promotion was in fact a love for public relations. He followed that passion and began working in the field immediately after graduating from Howard University. He went on to create Humble Hill PR, and has acquired a wide array of clients, including Emmy Award-winning television host and comedian Loni Love and hip-hop legend YoYo. Since the inception of Humble Hill PR, Hill has used his platform to be a voice.

“My cousin Clifton, we are very, very close,” Hill said. “Although we’re first cousins, we’re literally brothers — we grew up together. All of us (my cousins) grew up together and there was no difference between the titles of who we are… we literally grew up as brothers and sisters.”

“So, with that, all of us have always been near his side for different things that he’s gone through with sickle cell and the crises that he’s experienced,” Hill continued. “I said, ‘hey, why not try to help support the organization in light of my birthday to raise awareness?’ The stars aligned and I reached out to Ray (Clifton), spoke to him about it and he connected me with his organization. From there, the development of the relationship started happening.”

Kirkman, who has been battling SCD his entire life, acknowledges that every person with SCD has a very unique experience with the disease.

“We all have the same illness, but everyone’s experience can be drastically different,” he said. “Yes, we share some likeness when it comes to pain, but when it comes to the treatment aspect… some of us have had surgeries that others have not. Some of us are hospitalized more than others.”

“As it relates to hospitalizations and the institutions, that varies in terms of the care and the medical treatments that you receive, as well as the stigmas that come with it when you’re in ER,” Kirkman said.

Thankfully the support and example Kirkman’s family gifted him helped encourage him to keep fighting the good fight.

“Alex and I have a great aunt and uncle who had sickle cell. He lived to be in his 40’s and she lived to be in her 60’s,” Kirkman said. “Even though you hear ‘you’re going to have a shorter lifespan’… that’s what kind of plagues all of us as sickle cell warriors, no one wants to hear that. The truth of the reality is that it’s a real possibility. But having those relatives who lived well into their 60’s gave [me] hope.”

Kirkman’s personal experiences with SCD and the lack of proper care laid the foundation for his journey towards advocacy for other sickle cell warriors.

“That’s part of the misnomer… that it’s a Black people disease,” Kirkman continued. “Realistically, it can affect people that are Southern European — folks that originally came from the Mediterranean area which is where malaria happened. But we don’t get the attention that is needed. We all know how this country is and how they feel about us as Black folks. That’s why 60 or 70 years later, we’re still at the very beginning of trying to get treatment that’s going to make certain things not take place that every sickle cell patient deals with.”

The fight for proper care for SCD is especially important with the transition from childhood to adult treatment.

“Right now, many of us especially here in Detroit are fighting for better transition programs,” Kirkman said. “When you’re a kid, you get more help — everybody loves you and you get all the royal treatment. By the time you turn 18, you get dumped to the adult side, and that’s where the stigmatism happens, [with statements like] ‘Oh, they’re drug seekers.’ You don’t question cancer patients when they come in and say I’m in pain, you just treat them, but yet again because of what we look like [this is what we deal with].”

“Also, because oftentimes you can’t physically see that we have an illness, people think you’re joking or kidding,” Kirkman continued. “Anytime anyone is in pain you’re already feeling down, you’re already out of it. Yet, I have to take my energy to try to convince you as to the reason why I need something for pain.”

Kirkman’s experience with lack of proper care, and the fact that his experience mirrors that of so many people with SCD, is what ultimately led to Hill creating The Humble Hill Variety Show, which took place on September 24 in Detroit. The event featured performances by YoYo, who was the headliner, performances by comedian Mike Bonner and performances from a number of local artists. Hill and Kirkman partnered with the Sickle Cell Association of America for the event.

“That’s how all this came about honestly just to raise awareness across the board as it pertains to sickle cell, but also to bring more attention to the organization,” Hill said. “Thanks to Ray for making the connection. The partnership has been awesome. They were actually able to connect me with some fantastic experts within the space, specifically Global Blood Therapeutics. One thing I love to do when I have events, because of my entertainment background, is I love to infuse that education element into it so it’s not boring… that’s why I call it edutainment.”

As Hill continues to use his platform to educate, Kirkman continues to be an advocate for the SCD community, encouraging people to donate blood, to find out their sickle cell status and for those that have SCD to live their lives to the fullest despite their diagnosis.

“A lot of times people don’t realize, a lot of us need blood transfusions,” Kirkman said. “A lot of us receive transfusions on a monthly basis. Many of us as it relates to people of color and minorities don’t donate blood. I believe 1 in 3 sickle cell patients will need a blood transfusion, so that’s another big push that we do during September. Telling people to register for The Red Cross, if you see any blood drives sign up for them, or if you’re that person that likes to put on events, start a blood drive yourself. If you have sickle cell, live your life the only way that you can. Don’t allow people to dim you, dim your light or make you feel bad about having sickle cell. There are some of us that are ashamed. Thank God I had the family and the support that I had… that’s the reason why I’m so vocal about it. We’re all going to check out of here at some point, but don’t let that be your main focus. Enjoy your life, no matter if you’re in pain or not… don’t give up!”

Sickle cell can be diagnosed with a simple blood test, and yet many people do not know their status. For more information on testing options, resources for SCD, or to donate visit: www.sicklecelldisease.org.

Additionally, you can find out more about the work that the Michigan chapter of The Sickle Cell Disease Association of America is doing by visiting www.SCDAAMI.org . Also be sure to follow and support Alex Hill and Clifton Ray Kirkman II on IG @humblehill and @thekirkman_empire respectively.

Kevin Exil aka Biggs Mula: Fighting sickle cell while fighting for his dream