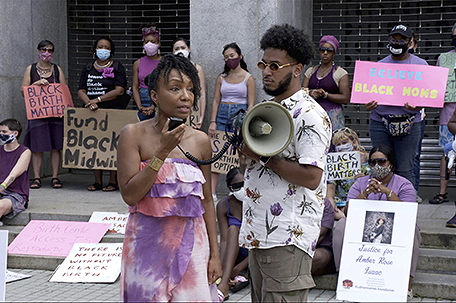 It was 2017 when filmmaker Paula Eiselt started seeing articles about rising maternal mortality rates in the United States. She’d had traumatic experiences giving birth to her four children but didn’t realize that the problems were widespread and disproportionately affecting Black women.

Tonya Lewis Lee, in her travels and conversations promoting infant mortality awareness, had also begun hearing stories about people’s sisters, friends and cousins who had died after childbirth. Though neither knew each other at the time, they both came to the same conclusion: This story needed to be told.

“What happened to me on an individual level was part of a much larger crisis that most profoundly affects Black women,” Eiselt said. “I really felt called to use whatever skills I have to help shed light on this topic and uplift the work that Black women have been doing for decades to curb this crisis.”

Eiselt knew of Lee’s work in the space and one day they “quite literally” ran into one another and set off on a journey to put a human face to the dire statistics. The result is “Aftershock,” the documentary they co-directed. It debuted Sunday at the Sundance Film Festival, where it is seeking a distributor.

According to the CDC, the maternal mortality rate was significantly higher in 2019 (754 deaths) than 2018 (658 deaths). The increase was statistically significant for non-Hispanic Black women, whose maternal mortality rate was 2.5 times that of non-Hispanic white women and 3.5 times that of Hispanic women. But both knew they would need to go beyond the statistics for their film to be compelling.

“I did not want it to be a big survey film with a lot of people just talking at you,” Lee said.

Then they found Shawnee Benton Gibson, whose daughter, Shamony Gibson, died in October 2019, 13 days after giving birth to a son. She was only 30.

“She was really our guiding light through the story of the film,” Eiselt said.

Gibson and her daughter’s bereaved partner, Omari Maynard, then introduced them to Bruce McIntyre, whose 26-year-old partner Amber Rose Isaac died in April 2020 after an emergency C-section. And together these two families became the foundation of “Aftershock” as they search for answers, solutions, and reform.

“These families wanted their stories told,” Lee said. “They want the story to be told so that no one else has to go through this.”

Because of COVID-19, Lee and Eiselt made the unique decision to give their subjects iPhones so they could film themselves during lockdown. The result, they said, was a gift.

“They were able to film things in a more intimate way that maybe we wouldn’t have been able to capture otherwise,” Lee said.

“Aftershock” also marks the first time Lee, whose husband is filmmaker Spike Lee, has a directing credit. A longtime creative producer, Lee said she wanted to have her full-on creative imprint on this film.

“Given that we’re talking about Black women birthing, it’s something so personal to me that I just really felt I needed to be able to have a real voice in how we were telling the story,” Lee said.

Both wanted it to be hopeful, too, despite the grim realities and statistics.

“We did not want to tell a doom and gloom story,” Eiselt said. “We wanted to have a story that put forth solutions that was empowering for birthing people.”

They were heartened that hospitals were willing to open their doors and work with them to show how they’re trying to address the issues.

“It’s my hope that people come away from the film really fired up and feeling like no matter who you are, no matter what you do, no matter where you are, that you do have something you can do about creating or helping to create better birth outcomes in this country,” Lee said.