A new treatment option for obstructive sleep apnea– Get the sleep without the snore, here’s how 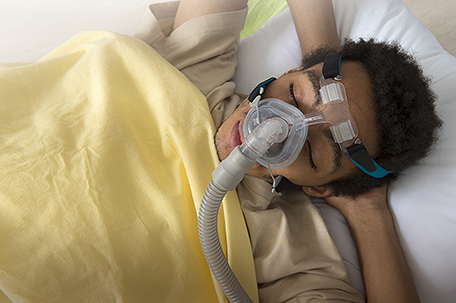 Al Pierce from South Carolina had always been a snorer, which kept his wife Gail awake night after night.

Eventually, she went to her doctor for sleeping pills as a last resort. After explaining why she wasn’t sleeping, her doctor suggested that Al’s snoring may have been related to an underlying serious condition called obstructive sleep apnea (OSA).

OSA is a common condition, affecting about 18 million Americans (Peppard et al., 2013). It occurs when the tongue and other soft tissues relax during sleep and block the airway. The brain senses a problem and wakes the body up just long enough to take a breath. This can happen hundreds of times throughout the night, resulting in poor and unrestful sleep.

“When left untreated, obstructive sleep apnea can cause an increased risk in motor vehicle accidents, daytime sleepiness, irritability, weight gain and high blood pressure, as well as more serious complications such as heart disease or stroke,” said Dr. Jennifer Hsia of the University of Minnesota-Fairview Health.

At the request of his wife, Al underwent a sleep study and was diagnosed with obstructive sleep apnea, a revelation that explained years of sleep troubles. His doctor prescribed him a CPAP, or Continuous Positive Airway Pressure machine, which required him to wear a mask during sleep to keep his airway open.

Though CPAP can be a successful way for many patients to manage their OSA, studies show 40-70 percent of people are unable to make CPAP work for them (Kushida et al., 2012). Pierce tried multiple masks and machines but none seemed to work. Eventually, he just stopped using it.

Fortunately for people like Al, treatment options are expanding. In 2014, the U.S. Food and Drug Administration (FDA) approved a new device called Inspire Upper Airway Stimulation therapy, specifically for people with moderate to severe OSA who are unable to use or get consistent benefit from CPAP. In contrast to CPAP, Inspire therapy works inside the body without a mask or hose. The device is composed of a breathing sensor and a stimulation lead powered by a small battery. Implanted during a short outpatient procedure, Inspire therapy continuously monitors breathing patterns during sleep. The system delivers mild stimulation to key airway muscles which gently moves the tongue and other soft tissues out of the airway.

Al was implanted with the device in 2011 as part of a clinical trial studying Inspire therapy. Nearly five years later, he is still using the device all night, every night. His energy levels have increased dramatically and he no longer wakes up feeling tired.

“Using my sleep remote, I simply turn the device on before I go to bed and turn it off when I wake up, then go about my day,” Al says of his daily use of the device. “Before Inspire therapy, I didn’t know what it was like to feel this good in the morning. Now, I do.”

To learn more about Inspire therapy, view important safety information and see if it may be right for you, visit www.inspiresleep.com.

Sleep for health & beauty! Part One