18 million more uninsured if Obamacare is repealed, not replaced 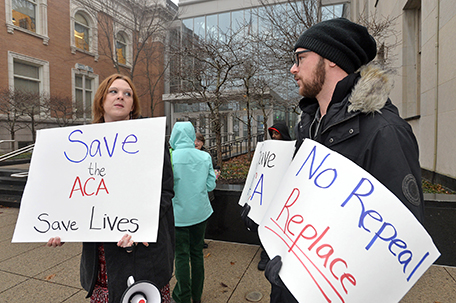 ABOVE PHOTO:  Molly Brechtel, at left, and Daniel Doubet join about 15 protestors gathered at the Federal Courthouse in Erie, Pa., on Thursday, Jan. 12, 2017, to deliver signatures to U.S. Sen. Pat Toomey, R-Pa., who has an office at the courthouse. The protestors urged Toomey not to repeal the Affordable Care Act without a replacement. Brechtel, 35, represents unionized registered nurses at the Pennsylvania Soldiers’ &amp; Sailors’ Home in Erie, and other local nursing homes. Doubet, 33, works for Keystone Progress, a Reading-based nonprofit focused on advancing progressive policy changes. (Christopher Millette/Erie Times-News via AP)

WASHINGTON — Insurance premiums would soar for millions of Americans, and 18 million more would be uninsured in just one year if Republicans scuttle much of President Barack Obama’s health care overhaul without a replacement, Congress’ budget analysts said Tuesday.

Spotlighting potential perils for Republicans, the report immediately became a flashing hazard light for this year’s effort by Donald Trump and GOP lawmakers to annul Obama’s law and – in a more complicated challenge – institute their own alternative.

It also swiftly became political fodder in what is expected to be one of this year’s biggest battles in Congress.

Republicans have produced several outlines for how they’d redraft Obama’s 2010 statute, but they’ve failed to unite behind one plan. President-elect Trump and GOP congressional leaders have at times offered clashing descriptions of their shared top goal, so eventual success is hardly guaranteed.

Together, they analyzed a Republican-written bill, vetoed by Obama last January, that would have erased major portions of his overhaul. Those included tax penalties for people who fail to buy insurance and for larger companies that don’t cover workers, federal subsidies to help consumers buy policies on the law’s online marketplaces and an expansion of Medicaid coverage for low-income people.

The new report said under such a measure, premiums for individual policies – excluding the coverage many workers get from employers – would swell by up to 25 percent the first year after enactment and double by 2026. The number of uninsured would reach 32 million over the decade, the analysts said.

However, Republicans say there’s a big difference between that 2016 bill and this year’s plan: Last year’s version would not have replaced Obama’s statute with a GOP alternative, while Republicans insist replacement will be an integral part of their new health care drive.

Citing that difference, Donald Stewart, spokesman for Senate Majority Leader Mitch McConnell, R-Ky., said the report “assumes a situation that simply doesn’t exist and that no one in Congress advocates.” AshLee Strong, spokeswoman for House Speaker Paul Ryan (R-Wis.), called the estimates “meaningless” because they ignore plans for legislation and regulatory actions by the incoming Trump administration for revamping how people could obtain coverage.

“Nonpartisan statistics don’t lie,” countered Senate Minority Leader Chuck Schumer (D-N.Y.), who said the report showed Republican plans to void Obama’s overhaul “will increase health care costs for millions of Americans and kick millions more off of their health insurance.” House Minority Leader Nancy Pelosi (D-Calif.), said it illustrated that the GOP effort “will be nothing less than a nightmare for the American people.”

Trump seemed to complicate the GOP drive last weekend when he told The Washington Post that a forthcoming Republican plan would provide “insurance for everybody.” In contrast, some congressional Republicans have described their goals more modestly, saying they will offer “universal access.”

In one sign of how GOP plans continue proliferating, Sen. Susan Collins (R-Maine), said she and Sen. Bill Cassidy (R-La.), are planning legislation that would let states retain coverage under Obama’s law or choose different options.

The CBO analysis has particular weight because Republicans have cited last year’s bill as a starting point for their 2017 drive to erase Obama’s law.

For Senate procedural reasons, that 2016 GOP bill also had to leave intact some mandates that Obama’s law has imposed on insurers. Those include requiring coverage of certain services and barring insurers from denying policies to sick people or charging them higher rates.

Those same Senate procedures could make it hard for Republicans to erase the mandates this year, too. That would make things tough for the GOP because those insurance requirements tend to drive insurers’ costs higher, and leaving them in force while other parts of Obama’s statute are erased could wreak havoc on markets.

CBO said that under the 2016 Republican bill, the number of insured people would fall mostly from annulling the tax penalties Obama’s law imposes on people who don’t buy policies: Some people would simply drop out if not forced to buy insurance. In addition, some insurers would leave individual insurance markets as consumers stopped buying coverage.

The report estimated that half of Americans live where no insurers would sell individual policies in the first year after marketplace subsidies were eliminated. That would grow to 3 in 4 people by 2026.

At her last official session with reporters, Obama’s outgoing health secretary, Sylvia Burwell, said a GOP repeal without a replacement would push the market into a “negative spiral.”

In early signs of grassroots rumbling, KHQ-TV news reported that Rep. Cathy McMorris Rodgers (R-Wash.), was interrupted by chants and booing at a Monday event in Spokane, Washington. Denver TV’s 9News reported that Rep. Mike Coffman (R-Colo.), stealthily left a Saturday community event early with more than 100 people waiting to talk to him. Both back repeal of Obama’s overhaul.

Many Americans incorrectly believe Health Law has been repealed