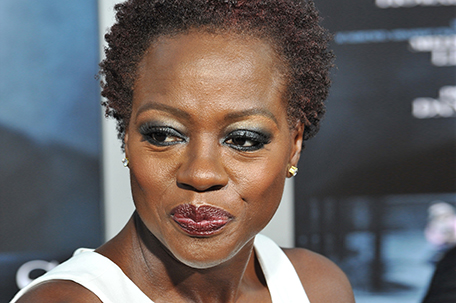 Viola Davis’ home was allegedly targeted by hoodie-wearing burglars, according to multiple reports. The “How To Get Away With Murder” actress and her husband Julius Tennon were reportedly asleep in their second-floor bedroom in Los Angeles’ San Fernando Valley when they were awakened by the sound of breaking glass. The couple immediately turned on their lights, causing the burglars, who used a ladder to climb to the second floor balcony to flee the scene before cops arrived. The thieves were caught on video as they escaped. Other celebrities who live in the Davis and Tennon’s San Fernando Valley posh neighborhood, such as Mariah Carey and Jason Derulo, have been victims of recent robberies.

“Black Panther” stars Lupita Nyong’o and Angela Bassett were reunited on Easter Sunday when they both took in a performance of the Broadway play “Children of a Lesser God” at Studio 54 in New York City, reports Just Jared. Following the play, Lupita and Angela went backstage to greet actors Joshua Jackson and Lauren Ridloff, as well as the play’s director, Tony award winner Kenny Leon. Ridloff, who is deaf and African-American, is not only making her Broadway debut, but this is also her first acting job. Ridloff was Leon’s sign language instructor during his preparation to direct the show when he suddenly realized that she had all of the elements he was looking for in his lead character.

The National Endowment for the Arts (NEA) Jazz Masters award, which comes with a $25,000 prize, is widely described as the United States’ highest honor for jazz. Songstress Dianne Reeves is among the NEA’s four newest recipients of the prize. According to custom, the new class will be inducted in a tribute concert and ceremony at the Kennedy Center on April 16. The legendary songstress, songwriter and now recipient of the Jazz Masters Award commissioned Fashion Master B Michael to create her dress for this iconic moment.