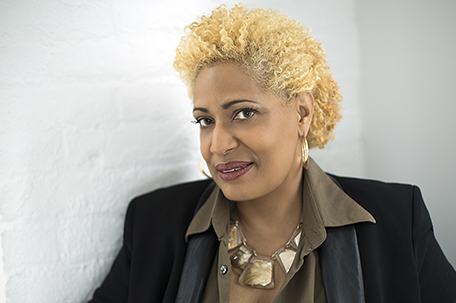 Cadillac drove into New York City this past weekend as a premier sponsor for the American Black Film Festival (ABFF) and took the world’s largest city by storm. Aside from sponsoring Black America’s top, most classy event of the year, Cadillac also hosted  a group of media from around the country. Aside from receiving ABFF essentials such as signature backpacks and carte blanche to all of the events, Cadillac gifted media with iPad cases, a wine set, delectable lunches and cocktail parties, as well as an exquisite dinner at Minton’s Jazz Club in Harlem, all of the time transporting the media  in 2015 Cadillacs. Out of the many films showcased, Cru, swept the Festival’s awards presentation, not only tying with Una Vida for Best Picture, but also winning Best Director, which was presented by GM Diversity Executive Jocelyn K. Allen, along with a $5,000 check to director Alton Glass, Best Actor to Keith Robinson and Best Screenplay. Aside from Robinson, Cru’s cast included Richard T. Jones, Melissa DeSousa and Harry J. Lennix. Cadillac also sponsored a Spike Lee Retrospective moderated by TV One’s Roland Martin……….

On July 20, which was the release date of Think Like A Man Too, Hair Products Mogul/Film Producer Bernard H. Bronner, filed a legal complaint with the Superior Court of Fulton County, Georgia, against directors of Rainforest Holdings, Inc., namely Will Packer and Rob Hardy, for among other things, breaches of fiduciary duty, gross mismanagement, misappropriation of corporate assets, waste of corporate assets and abuse control. Think Like A Man Too, which Packer produced, grossed $30 million dollars opening weekend to make it the number one movie in the country. In the late ‘90s, Bronner purchased one-third of the company, raised $250,000 and invested $500,000 of his own money. Packer and Hardy’s Rainforest has grossed an excess of half a billion dollars, with box office hits like Think Like A Man, Stomp The Yard, This Christmas, Takers and Obsession. However, to date, Bronner has only received a fraction of the initial amount invested……….

Harlem Week began its 40th Anniversary season on June 25 with a special reception hosted by The New York Philharmonic at Avery Fisher Hall at Lincoln Center in New York City. The theme for the reception and Harlem Week 2014 is FOREVER HARLEM: Yesterday, Today and Tomorrow. The reception was followed by a performance from the New York Philharmonic. Special 40th Anniversary Honorees for the evening included Six- Time Tony Award Winning actress Audra McDonald and Original Harlem week sponsors The New York Amsterdam News and Apple Bank……….

“Saturday Night Live’s” Kenan Thompson and his wife Christina Evangeline welcomed a baby girl on June 20 in New York City. Evangeline posted a photo of the proud dad with his bundle of joy with the caption: “We’re just really sleepy.” It’s the first child for the couple who tied the knot in November 2011…….