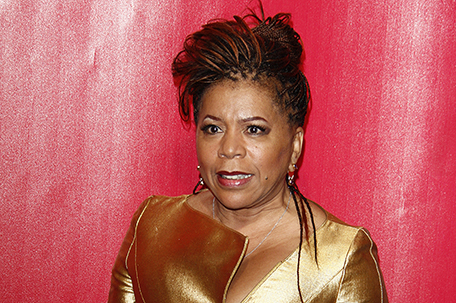 The Broadway Company of the Tony Award-winning, record-breaking hit musical “Chicago,” which recently celebrated its 21st anniversary, will welcome legendary singer-songwriter Valerie Simpson making her Broadway debut in the role of Matron “Mama” Morton starting Monday, March 12 at the Ambassador Theatre (219 W. 49th Street, NYC). Joining Ms. Simpson is Chazz Lamar Shepherd, from the original Broadway production of “The Color Purple” and the national tour of “Dreamgirls” as Billy Flynn……..

The star-studded Hollywood premiere of “A Wrinkle In Time” was phenomenal. The evening began with Nissan’s pre-reception at the Hollywood Roosevelt Hotel. where the automotive company presented a $100,000 check to rising filmmaker Ciara Boniface to assist her with her next film. The 19-year-old college student was selected by director Ava DuVernay and also received a 2018 Nissan Leaf and a trip to the February 26 premiere.  From there we headed to the premiere’s blue carpet. Earlier in the day Nissan unveiled a trio of Nissan Leaf Show vehicles inspired by Disney’s “A Wrinkle In Time” as part of Nissan’s collaboration with Walt Disney Studios Motion Pictures. The vehicles are modified to resemble the characters Mrs. Which, played by Oprah Winfrey, Mrs. Who, played by Mindy Kalling and Mrs. Whatsit, played by Reese Witherspoon. Oprah danced down the blue carpet and excitedly posed in front of her car. “A Wrinkle In Time” opens March 9………….

“Clueless” star Stacey Dash has made it official. According to reports, she’s running for Congress in California. The actress filed paper on February 26 to run in California’s 44th District, which encompasses Compton, Watt, San Pedro and North Long Beach. For years, the district, which overwhelmingly voted for Hillary Clinton in 2016,  has had a Democratic stronghold and is currently represented  by Nanette Barragan. Stacey is a Republican……..

Oscar parties in Hollywood this week include Academy Award-winning musician and actor Common’s 4th annual Toast to the Arts soiree. The garden set intimate dinner has played host to stars who include Oprah Winfrey, Beyonce and Jay-Z, Halle Berry, Gabrielle Union, Samuel L. Jackson and many of Hollywood’s A-list movers and shakers. Oscar nominated films “Get Out” and “Mudbound” will be honored……..

Kandi Burruss is joining the cast of “Chicago” on Broadway

Toni Braxton is currently in negotiations to star in the Broadway adaptation of “Chicago.”