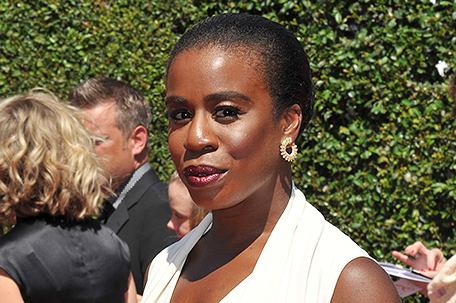 Emmy history was made when twice Oscar nominated “How To Get Away With Murder” star Viola Davis won Outstanding Actress in a Drama series, becoming the first African American actress to claim that prize. Davis overcame fierce competition including Taraji P. Henson – whose own nomination made this the first year two African American actresses were nominated in the category. “The only thing that separates women of color from anyone else is opportunity,” an emotional Davis told the audience. Her remarks sparked a Twitter rage by “General Hospital” actress Nancy Lee Grahn, who later apologized and deleted her tweets, calling Viola “a Goddess.”………..

Prior to winning an  Emmy for Best Supporting Actress for her role on “Orange Is The New Black,” Uzo Aduba spent Saturday night hanging out at the NBC party at BOA Steakhouse in West Hollywood. The swanky steakhouse was bouncing Emmy Eve as the packed house of industry-ites who had been making the party rounds feasted on a frenzy of food. Uzo is set to star in NBC’s upcoming live musical “The Wiz”. She went to the party with her sister following the BAFTA tea after a quick outfit change. The ladies were spotted at the Raw Bar where Crab Legs, Lobster, Shrimp and Ceviche was being served …..

In other Emmy news, Regina King won an Emmy for Best Supporting actress in a Limited Series or Movie and Terrence Howard and his most recent ex-wife Mira Pak were arm-in-arm amd walked the red carpet together at Sunday night’s Emmy Awards. Terrence and Mira were married in October 2013, but she filed for divorce this past March.  She gave birth to their son in May, and the divorce became final in July. The ex-couple wore matching wedding bands…………

Lifetime has given the greenlight to Un-Break My Heart, an original movie based on singer Toni Braxton’s memoir. The authorized film will follow Toni’s ups and downs through severe chronic illness, financial troubles and divorce while navigating her son’s autism and family struggles. Toni will executive produce and appear in the film………..

Omarosa indulges at Nine Zero One Salon in West Hollywood