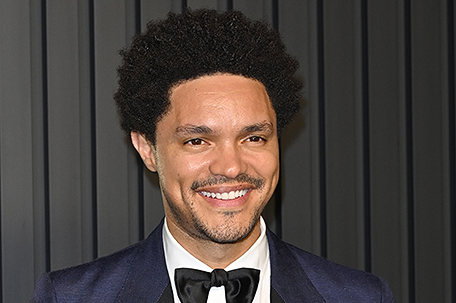 On Nov. 29, Trevor Noah, host of The Daily Show, hosted a “Black Theater Night” for the Tony-winning Best Musical “A Strange Loop,” complete with a hilarious and insightful cast talkback. Playwright, composer and lyricist Michael R. Jackson, creator of  “A Strange Loop,” choreographer Raja Feather Kelly and musical director Rona Siddiqui, joined Noah and cast members James Johnson, Jr., L Morgan Lee, John-Michael Lyles, John-Andrew Morrison, Jon-Michael Reese, Jaquel Spivey and Jason Veasey for the talkback. “I’ve now been to “A Strange Loop” four times and it’s funny every single time I come.  I feel like I’m focusing on something different, I’m learning something different and there’s a different part of the play that almost gets revealed to me,” Noah said, who called the show, “one of the most spoken about and one of the most spoken about and one of the most lauded productions on Broadway.” The comedian also congratulated the show on its recent Grammy nomination for best musical theater album. “A Strange Loop” will play its final Broadway performance on Jan. 15, 2023.

According to multiple reports, Kanye West and Kim Kardashian are now officially no longer husband and wife. In documents obtained by People magazine, the ex-couple “will have joint physical and legal custody of their four children: North, 9, Saint, 6, Chicago, 4, and Psalm, 3.” The rapper turned clothing designer is required to pay Kardashian $200,000 per month in child support. The Chicago native is also responsible for 50 percent of the kids’ medical, education, and security expenses. Both West and Kardashian waived spousal support. They also agreed to go to mediation if there are any disputes between the two of them over the children. The couple have a pre-nuptial agreement which will determine how their assets and property will be divided. TMZ was first to report this story.

The long awaited award winning documentary chronicling the life and career of music legend Dionne Warwick will finally make its way to television. “Dionne Warwick: Don’t Make Me Over” airs on New Year’s Day – Sun. Jan. 1, 2023 – at 9 pm ET/PT on CNN. “Dionne Warwick: Don’t Make Me Over” was five years in the making, according to filmmaker Dave Wooley, who wrote and solely produced the documentary. Wooley also directed the film alongside veteran David Heilbroner.  “Working on Ms. Warwick’s documentary is a dream come true,”  Wooley said. “To see the movie come to fruition and most importantly, for Ms. Warwick to receive such accolades during her lifetime is gratifying,” explained Wooley, who also co-authored Ms. Warwick’s autobiography, “My Life As I See It.”

Tongues are wagging that Mariah Carey is spreading holiday cheer. On Nov. 25, the self-proclaimed Queen of Christmas, was spotted having dinner at Nobu in New York City, with her boyfriend Brian Tanaka. In other news, the Grammy-winning songstress has signed on as a co-producer of the new musical comedy “Some Like It Hot,” now playing at the Shubert Theatre on Broadway. “I first became familiar with this story through the timeless film starring Marilyn Monroe. She’s been an important touchstone throughout my life, so much so that I acquired her treasured baby grand white piano at an auction,” Carey said. “When Neil Meron shared this new take on the beloved film, I knew I had to be a part of it.”